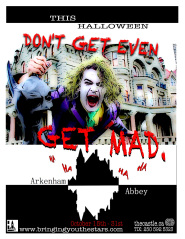 Launch Pad Productions proves that they will fly high and soar through the cosmos as they take audiences on journeys of nerdom, Shakespeare (due in April in an adaptation of Shakespeare‘s The Taming of the Shrew) and beyond. First up is their homage to all things Batman.

Arkenam Abbey wonderfully makes use of the Gothic tradition to show the decay of the soul as The Nightwatchman (Justin Carter) journeys through the hallowed halls of this ‘hospital’ and confronts its denizens. Most of them have a sordid past with him and they challenge him to face his fears than theirs as both sides — nicely represented by Black Jack (Trevor Hinton) — face the inevitable. Just who will dominate the night?

Actor, Writer and Director David Radford crafted a wonderful story that delves into breaking down the bat and the humour is well placed to get audiences laughing along. His killing joke is also an in-joke to those audiences members in the know. For instance, Radford plays The Fool or “Mr. J,” — that’s not in reference to the nickname earned from ‘that’ animated series but in the fact the nun (Christina Patterson) is trying to alphabetize, organize and file away her eventual success with restoring the inmates to society. But in this microcosm of the castle, just who becomes the leader of the pack is a subplot that comes to light in the play. Even she morphs to become Pantaloony and what’s fantastic in Patterson’s performance is that she does not try to mimic the tonal quality that Tara Strong or Arleen Sorkin injected since the original character’s inception. Jared Gowen pulls triple duty as the Man of Straw, Gordon and The Puzzler. His extra work to make each character distinguishable has to be commended. He’s effectively creepy as the Man of Straw, and will have some fans of horror wonder if he drew upon a character from Clive Barker’s Nightbreed, when Decker put on the mask to give the dark side a robotic mannequin like quality.

As these inmates lead audiences throughout the maze-like castle, the one detail I appreciated is that everyone is part of the play. The attendees are introduced to this hospital and the intention was to visit the auditorium. But when a violent incident breaks out, everyone become hostages! To even further the fact, some folks might get pulled away for a separate little story before getting reunited. Hope does not necessarily fade away as everyone all knows that what we’re experiencing is a play. The stage show that happens proves that there’s more to witness in the madness that’s about to unfold. The Nightwatchman does what he can to save us …. or so we think! To say more will spoil the adventure, so I have to wonder what this theatrical group can do next? I can imagine a revision to add another character or two. As for whether that can work, it’s hard to say. The five-person group was solid on opening night, although to see a variation of Poison Ivy can be great.

I have to wonder what the future may hold when this group puts on a truly supernatural spectacular that has audiences feeling like they are part of a ghost dimension. After all, the Castle is haunted. Not everyone on the committee running this tourist attraction admits to it, but for those folks sensitive enough to the energies, like I did when walking up to the hill, there were cobwebs brushing across my face when there was no wind blowing!