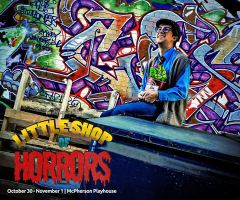 Tickets can be bought at the McPherson Theatre Playhouse (3 Centennial Square, Victoria, BC) at the box office or online.

Kaleidoscope Theatre‘s Halloween spectacular is not just taking place in the support of bringing youth to the arts. It’s also a major fundraiser for the theatre company to keep their programs running year-round. Artistic Director Roderick Glanville leads this year’s production of Little Shop of Horrors and he recounts his youth as one of simply finding the right place to belong when the academic side of the education system didn’t quite hold his interest very well. Fortune would find him discovering theatre at the suggestion of his teacher and he loved it.

“From that point on, throughout my whole schooling. I was involved in every theatre program, did every single show (all the way through middle school and high school), excelled in all communications and theatre and formed my own,” said Roderick.

Frequent attendees of this autumn-centric show will find familiar names in this production. This director knows that he should not stress them out since they are volunteering their time to put on a Halloween treat for the theatre-loving community of Victoria, BC. He likes to see performers come back and not feel burnt out because of how stressful last year’s event went. The point is to have fun, and it’s shown in The Addams Family Musical and Rocky Horror, which played in the past two years.

“I directed Rocky, with Griffin Lea playing Dr. Frank-N-Furter, and I’m glad he’s continuing it, on a variation of a theme; the group have formed Rebel Knock Out (RKO) Productions, their own company. Now, that’s growing your community,” said Glanville.

In some ways, to see people embrace theatre much like he did from his youth shows the passion, the heart, that quickly develops. It doesn’t matter at what age that develops; just how it grows and embraces people discovering the arts for the first time is key. Glanville admits to feeling 17 years old inside. Real age does not matter. He has fond memories of being that boy in grade 5 pulling the chair, the dolly, when he played Rudolph the Red-nosed Reindeer with his friend Gerry Sanderson (who played Santa) and the feeling he got of the thrill the audiences felt. That’s why he does this work. He’s reaching out to those who want to feel young again. When recalling Rocky Horror, “Don’t Dream It, Be it.”

With his vast experience that started with training at the Stephenville Festival in Stephenville, Newfoundland under Maxim Mazumdar to work in Ireland at the Irish National Ballet, and more work at places like the Mermaid Theatre of Nova Scotia, coming out to work in the West Coast was a joy. He’s put plenty of effort into the various projects Kaleidoscope Theatre has done throughout the years. Whether as an artist, an actor, an instructor or director, he’s known about this training center for a long time.

“We’ve been around for 41 years — my responsiblity has only been the last 5½ — and I hope it continues on as long as we possibly can,” said Glanville. “I believe the kids need it because it transformed my world. So I can speak to it from integrity and honesty when I was a child who was introduced to drama and theatre. That allowed me to be accepted, included and celebrated.”

When looking at what’s in store for Little Shop of Horrors — and why previous shows had a specific theme, if not focus, in its narrative — this director believes that this company is giving the people of the city of Victoria to get their freak on. “This city is very eclectic and very unusual. And you can capture an untapped market just by making the right choice of play or musical,” noted Glanville.

When directing a comedy, or any type of show for that matter, there’s also the risk of not putting in the focus of the narrative where it needs to be. For this artistic director, the true connection is in where the heart comes from. That is, to create a bond with audiences. In Rocky Horror, it’s in Dr. Frank-N-Furter’s plight; there’s a sadness in his mission. He’s lonely. In The Addams Family Musical, it’s in Wednesday Addams coming of age story when she discovers true love. With Little Shop, it’s in Seymour’s sacrifice because of his affection for Audrey. To stay in theme will be tough in whatever Broadway production (or off) that gets decided for next year.

“We kind of created a bit of a monster,” admitted Glanville. “Not only that, how do we continue to sell our shows and make it affordable to produce? That became a lengthy debate because our board wants to continue with the Halloween timeline. They want something that’s a musical and funny. Well there’s only so many shows available that can fit that criteria that we can afford to pay the royalties for.

“I suggested four different projects and said this one is the strongest choice. It’s family friendly, it’s not scary but kind of spooky and it’s a classic. Every single song in the show is a hit. It’s a love story with a plot twist about an alien plant who wants to take over the world, and the music is by Alan Menken, Mr. Disney [of the song world], himself.

“And we were late in the season getting our audition notice out because of the delay in deciding which show to do. I thought, ‘Okay so who’s left in the community because Langham Court‘s been doing their auditions for their show, The Victoria Operatic Society always puts on a show pretty much at the same time and all the community groups are also holding auditions for their shows coming in the Fall. Who’s going to show up for us? What happened was bliss! 17 people showed up. I was able to cast each one of them not because they came out but because there was a part for every one of them that was perfect. A couple of them are from the Canadian College of Performing Arts whom I’ve worked with.

“We also have three 9-year-old girls from Kaleidoscope. Now there are no official parts in Little Shop of Horrors, and I turned them into the Ronette Urchins. And so the Ronettes are nurturing their own little sisters. I’ve also got roles that are doubled and tripled up to populate Skid Row.” revealed Glanville.

To explain why a live band is not possible simply lies in the costs. When this production is banking in getting the plant, Audrey II, to look right, the investment is huge, and the goal is not lose money. The entire theatre community was supportive during the search to find props other local groups built; much of which was donated or bought at minimal cost. Even an authentic dentist chair from the 1930’s was tossed into the deal. To see this wheeled out, with working motors, is going to be a delight on opening night. Even though the story is set in the 60’s, this throwback to an even earlier era — the pulps which fits better — is a gas.

The highlight of Little Shop of Horrors is with watching how the Audrey II plant grows from a little bud to something monstrous. Unlike some productions where the singer is off-stage, this one will put Sasha Moriarty-Schieven front and center. Quite literally, she is the soul of the plant and will be seen. Glanville says she’s terrific. She has a monster voice that works. She wrote and appeared in Space Wars: The Empire Strikes Blanc for the Muse Winery in North Saanich.

“When we did our auditions, I had four candidates for Seymour who came in and rocked it. What it came down to is balancing and matching the right actor with Audrey. When Julia French walked in, she gave me the character and a voice as big as a house. She had a look that was absolutely perfect and she beautifully matches with Ian Crowe (who plays Seymour). I believe that the love [presented on stage] has to feel real,” said Glanville.

This director knew of Crowe’s work from the CCPA when he saw him at the Belfry Theatre in Spring Awakening. He was impressed and fortune favoured the bold when he came in to audition.

“What’s quirky and fortunate for our show is that Julia is tall. She towers above Ian, which is even funnier, especially when she runs in her high heels,” noted Glanville about the key players. To round out the antagonism in the story, “The dentist, played by Yanik Giroux (also this play’s musical director), and he’s 5’4″ so the size comparison of the abusive dentist and her is again just physical visual comedy at its best!”