E: This newer restaurant has one great thing going for it and that’s its evolving menu of fusion delights. From the Incredible Hulk which I first tried to the Pink Panther, I’m sure the almighty Thor will pop up one day as a corn, tuna and tamago combination that’s rolled inside out for fusion sushi diners to feast on. Poor Odin; he must be rolling in his grave by now at seeing his son turned from Norwegian to Japanese.

I must say that I wasn’t too sure about this place when it first opened over the summer. The name is not necessarily inviting, but it does live up to being the place to visit for the strange and exotic. I see that with the monkey roll, they are trying to compete against the time-honoured Shiki Sushi downtown. Bananas and rice? Surely they must jest.

James and I met up at Hillside Centre to deal with some issues he’s having with one certain operation, and since we had to wait for them to figure out what to do with us, I said let’s set sail to Sushi Island since it’s nearby!

J: And that certain operation never could get their act together. At least Sushi Island can. I took my mom here before and I praised it to Ed afterwards but he adopted a “we’ll see” attitude. This article will probably be Ed’s way of admitting I’m right unofficially. I love my Japanese food authentic, fusion and mom and pop style (Sushi Plus). If ever I live in Japan, American food would be quickly abandoned in favour of my adopted country. One can only dream.

E: I stepped onto Sushi Island before James did and truth be told, I wasn’t really sold on their Hulk roll; it was made with crab meat, avocado, cucumber, asparagus, prawn and lettuce to name a few. It was huge. One of these was enough to power me through the day. Maki rolls are made to be bite size. One chomp is all an individual needs to eat them. Half their rolls require two or three.

This operation claims to be authentic Japanese but I have my doubts. Maybe modern Japanese with larger appetites to fuel James up (he amazes me with his powers of overstuffing himself), but for those from long ago, what’s served here would be a meal for three days at least! And I still haven’t gotten around to addressing the ramen and the rolls I had to share because I was feeling stuffed pretty fast.

J: I also doubt the claim of authentic, it looks of fusion cuisine to me. I’ve heard some of the dishes served in Japan and very little was on their menu. But I was still happy to be within the welcome confines of Sushi Island. I started off with a Tako sunomono salad to which Ed publicly ridiculed my pronunciation in front of the server.

I was pronouncing it fine but Ed thought he would needle me all the same. Maybe being the only caucasian in a Japanese establishment makes one more susceptible. How do you say “Ed’s cruising for a wedgie” in Japanese? The sunomono salad unlike Ed’s ridiculing had faltered. I couldn’t taste much of the flavour until I had finished half of the salad. 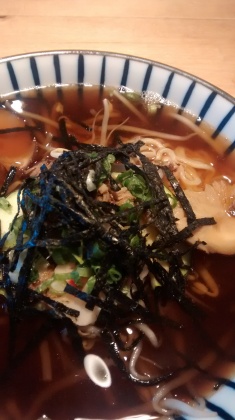 E: I jumped right in with the sushi arriving before my So-Yo Ramen. The soy base was light and delicious, but the noodles tasted a little off, like all of the starch was not blanched off. I sometimes don’t mind that taste, but it really dominated part of my meal before I started to put the ginger into the broth to help balance the overall tastes. The bits of char siu meat was chopped up to mice-sized proportions and overall, I felt this dish is better than in what Kuma Noodle Japan offers.

J: Ed should know better than to insult one of my favourite hangouts. Kuma may not be the best in the world but at least they are consistent and their customer service is top-notch. Perhaps this is another set up for Ed’s “I’ve been to Japan” speech.

For my own, the noodles in the miso ramen were starchy but the broth was delicious. The broth had a deep rich flavour, made so by a mix of the seaweed, Portobello mushrooms, and the marinated pork.

E: No, actually, I find that Sushi Island offers more variety than Kuma. Sure, there’s not much a cook can do with a traditional bowl of Ramen soup, but when the broth is clear than cloudy and more items are offered in a hearty bowl of noodles, I can be very picky. There’s more variety to be found in this establishment’s bowl of noodles — finely shredded seaweed, crispy soy beans, fermented egg, and the succulent shiitake mushrooms. I don’t recall Kuma ever offering these on top!

J: There is plenty more a cook can do with a traditional bowl of ramen noodles. And perhaps one day Kuma will burn their menu of ramen selections and then from the ashes they will rise up like a phoenix and claim their rightful place as the ramen kings of Vancouver Island. Or we could just go to Tokyo and enjoy a decent bowl during the evening hours before the trains stop running.

E:  And that’s my best memory of Japan which James knows my story of all too well; but what I partook in was after the trains stopped running and people are in need for a tasty meal before finding a taxi home. I saw rows of taxis on mass, and thought, now that’s service.

Even some food vendors were out and quick to set up a makeshift operation. I had to wonder about Sushi Island; it was great at the start but nobody really came by to offer liquid refills. One guy even saw me as I gestured that I wanted more water, and he walked away.

J: There were two other people in the restaurant and the service was non-existent. There were two servers for two tables and they completely dropped the ball when it came to seeing to our needs (which was minimal). The most number of times our server visited our table was once and that is when it involved the delivery of our food.

E: I rather enjoyed the Pink Panther Roll. It was not over the top and the mixture of ingredients — cucumber, avocado, ebi, inari (which really worked well), smoked salmon and asparagus — is a testament of this place’s creativity. There was only one stalk of asparagus which was no doubt meant to be the tail I had to pull. I really did not discover it’s soft taste in the individual pieces that were before me.

The Bacon roll was simply crazy; the slices were deep dried tempura style and it made for a tasty contrast between the rice and crab meat used. I though too much unagi sauce was used, but it certainly made for a nice presentation when the dish was brought out.

Like a pal I was, I wasn’t going to let James whimper with all these morsels before me to devour. I offered him a piece of each.

J: The Pink Panther was the best of both sushi selections. With the bacon roll, the tempura with bacon was more like bacon candy then chewy morsels. Sushi Island has to be the best sushi restaurant in Victoria and when I return to this place on my own, my tummy will be tickled pink. And if Ed tags along, with the amount he eats, sadly I’ll only be thinking blue.