Although a car is needed to get to Surrey, BC to visit La Charcuterie Delicatessen, a deli and Scandinavian grocery store in an industrial neighbourhood known as Port Kells, thankfully to get taste of what goes on there can be seen around the world. The Sandwich Nazi is an aptly titled documentary that looks at the scandalous life Salam Kahil, the owner and operator of this establishment. At Two Hungry Blokes, we’re eying the size of those sandwiches that’s made than the owner’s ballsy attitude. Until we can get there, Ed had the opportunity to communicate with Lewis Bennett, who decided to turn the life of this deli operator into a hilarious film!

For people unfamiliar with your work, could you introduce yourself please?

My name is Lewis Bennett and I’m a documentary filmmaker living in Vancouver. Most of the films that I’ve done were made with Benjamin Taft and Calum MacLeod and we try to specialize in documentaries that will make you laugh.

How did you first meet Salam Kahil?

I’m originally from Langley, BC and Salam’s deli is in Surrey so I’d heard about his deli for years but had never been in for a sandwich. When I was working on a series of short documentaries in 2012, I read a post on Reddit with a whole pile of amusing anecdotes from customers of Salam’s deli La Charcuterie.

Salam sounded like a fun guy so I went into the deli to buy a sandwich to see what it was like. I’m a bit of a nervous dude and was probably acting awkward and he started hounding me as soon as I entered the deli – asking me if I was gay and then if I was an undercover cop. He then started talking about the car accident that he’d been in recently and described, in incredible detail, how the steering wheel had broken off and slammed down on his penis. It was a pretty surreal experience so I asked if we could come back later in the week to film him and he said yes.

What made you decide to make a documentary about his life?

I really love juvenile humour so I’ve been drawn to people like Salam since I was in kindergarten. He kept making us laugh so we wanted to spend more time with him. The project started with a short documentary and as were making that film we felt that there was a whole lot more to his story so we expanded it into a feature.

I recall him describing himself as an Arab Muslim Lebanese with a Scandinavian deli with a French name in Canada.

That’s something to really chuckle at, and in terms of you wanting to bring out the humour, was that difficult to do? What would you say the magic ingredient is for tying together a documentary about a deli owner sexual exploits in one moment, being a humanitarian and an individual feeling lost (if not almost without a family)?

It wasn’t very difficult to make the film funny. All we had to do was hit record and point the camera in his direction.

If you go into the deli, Salam will be riffing on 100 different topics. Sometimes it’s big picture things like religion, politics, or his family life and sometimes it’s just hilariously silly banter. The topic of discussion will switch on a dime and it’s all coming at you at 100 miles per hour. I think we were trying to recreate that chaos with the film so it’s a little jumpy, editing-wise. If you’ve spent some time in the deli and then you see our film then I’d be surprised if you felt that we didn’t represent the experience in an accurate and honest way.

As a sandwich maker, what’s special about his meals that’s worth seeking out for? One detail I noticed is in the size of those packages, which looks like a whole chicken.

Yeah, they’re the biggest sandwiches I’ve ever seen or eaten. It is very difficult to finish one in a single sitting. Most people cut the sandwich up and eat it over the course of a few meals. There is so much meat that you can take half of it out and use it to make other sandwiches.

Sometimes he adds rémoulade too and I’m a big fan of that condiment now. 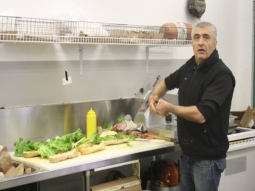 How long did it take to film?

It took about 3 years to make the film and even now, we’re still tinkering with some final things. I took about 10 months off of work to edit the film and we all put in hundreds and hundreds of hours during production and post-production, working on the film in the evenings and weekends. It was a long process but most documentaries tend to take a while to complete.

I got my first grey hairs over the course of the production too, and I’m pretty sure that that wasn’t just a coincidence either.

What made you decide to focus less on Salam’s hobbies, like collecting original art and playing the cello. I would have thought some more exposition would have taken place.

I guess we didn’t want to make the film too long so we were trying to be vigilant about what we included. In hindsight, perhaps some more of that stuff would have been good to include. Some people might not have been interested in the art collecting or the cello playing though. He’s a man of many interests and pursuits and hopefully we at least hinted at some of them.

Salam came down to our World Premiere at SXSW and seemed to be having a lot of fun at our screenings and Q&As but has since expressed his disapproval of the film. One of his suggestions is that we didn’t highlight his charity work enough but I think there is about 10+ minutes of that stuff in the film. It’s great footage and the work he is doing is amazing but I’m not sure what else we could include on the topic without having repeated thoughts.

So you’re always trying to find a balance and sometimes you have to go with your gut along with the opinions of your test screening audiences.

Were there a lot of outtakes? (i.e. stories / incidents that were totally not safe to put to the cut?)

There are hours and hours of very funny and inappropriate content (and nudity) that didn’t make the cut for various reasons. Some of it just didn’t fit the story. We tried to use the comedy to emphasize or improve scenes that were pushing the story forward.

We did a tour of a room upstairs in the deli and we thought it was pretty funny but I think it scared our test audiences because they didn’t laugh at all. So we cut that scene out.

We removed a couple shots and blurred a few extra faces before SXSW, at Salam’s request. It wasn’t anything that was particularly scandalous or interesting though.

When he finally opened up about his family back home in Lebanon, how did you find those moments of self-introspection fitting for this movie?

Without those scenes I don’t think we’d have a film, to be honest. It feels like a real moment in a film about person that can be incredibly hard to get an accurate read on. It was the toughest footage to watch when I started editing because I felt like we’d become friends by this point so I felt terrible about what he’d been through.

Like the clientele Salam gets in, this movie will have a selective audience because of the profanity and nudity involved. What would you say to those people who are still unsure in going to his store or seeing this movie?

Salam actually has a very diverse range of customers and friends and they’re all extremely fond of him. If you can go into the deli (or the film) with an open mind then I’d say you’re likely to have a very good time.