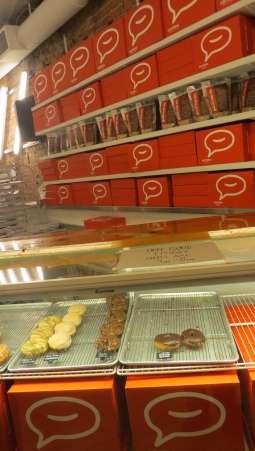 E: The next time James and I seek out a breakfast style place (or hunt for a quick bite), I’m recommending that we return to Cartems Donuterie. After feeling well-travelled to taste the donuts of the Pacific Northwest region (I’ve visited Top Pot in Seattle and Voodoo Doughnuts in Portland) I feel Cartems can put Top Pot to shame once word gets out. At home in Victoria, Empire Doughnuts is getting plenty of love in the nerd and downtown core community.

This Vancouver operation may not get as crazy as what Voodoo Doughnuts can offer, but I say it’s at a good start by offering a whiskey bacon doughnut to wet my appetite.

J: Better known as the bee sting, I was fearful of bees as I ate this doughnut. I’m sure I would give off a scent to attract the local population or one very hungry Pooh Bear. The entire shop has a rustic theme going on. I guess they want their customers to think of down home back country made doughnuts. And as long as there is no racoon scavenging through their garbage I am good with that image.

E: A geek convention is only as good as the nearby doughnuts or confectionery shops that can give everyone a good sugar rush. With two anime conventions coming up, Anime Evolution on Aug 5-7 and Anime Revolution on Aug 19-21 (now try keeping track of that in one thought!), sugar to power the rush between shows is required. I recall navigating Fan Expo Vancouver a few years ago. I needed it to race from the panel floor to exhibition chamber. They were separated by a floor and security saying you have to exit the building to enter it again on the other side that’s about 1.5km away! At Emerald City Comicon, Top Pot was simply too far to rush to and race back. Eeven though they are an official ‘sponsor’ of sorts; I’m still suspect on why they don’t have a booth or cart selling food closer.

At least with this Vancouver operation, they’re not too far from hotels or the convention center. I really have to return to do an order of a baker’s dozen or a half dozen to appreciate all the flavours Cartems offers. My verdict is definitely in on the whiskey bacon. They are nicely crisped up to go on top of the doughnuts and one is all that’s needed to give me energy for the day. I think bigger slices can help define this doughnut.

J: Bigger isn’t always better but when you serve a Boston Creme like Fry’s Bakery does in victoria, that is so smotheringly good. Bigger is better. And like any true geek who doesn’t love doughnuts. But if I eat a baker’s dozen I can attend the next con dressed as Jek Tono Porkins from Star Wars Episode IV, only the cockpit would have to come with me wherever I go.

E: I have to note that yes, for this particular shop, they even have a vegan gluten-free option too. Now how cool is that? Well, this establishment has a promise since it’s nestled not too far from the Vancouver Convention Centre and what I consider “downtown” — Vancouver City Center.

I imagine in a few years, it may branch out, but, for now, every overnight trip I make to Vancouver will have visions of a warm sugarplum fairy dancing above my head, begging me to visit. And her name is Cartems.

One thought on “[Vancouver, BC] Cartems Donuterie’s Sweet Rise!”