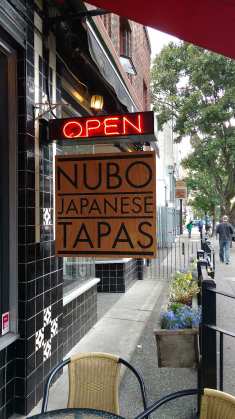 I’m fairly sure Nubo is very nouveau. Their designer maki rolls certainly looked very tantalizing, making this place worth visiting again for that alone! But when I noticed that I’ve seen similar elsewhere (especially after having sushi in four different cities), well, perhaps they are not? I was seeking a taste of the old country — traditional — and this place certainly delivers. On a busy night, I managed to get a seat at the sushi bar. Reservations are certainly recommended, especially if you’re planning on seeing a yuletide production at the MacPherson Playhouse. In fact, I recommend doing so for the four operations that run here. If time is tight, then the time is best maximized by being here early and just enjoying the scents.

If only I had two hundred dollars, I would be feasting on the variety offered here for an entire month. I could on a weekly basis, though I have to spread the love between here and Omakase. When considering their motoyaki is made from scallop and prawns, I’m already drooling. When I saw that this operation offers monkfish liver, they have a one-up on many other local places I’ve been to. In what I tasted is divine, and I was tripping at the variety of garnishes used on each slice. Each serving was floating in a lake of light soy sauce, and that was just my starter!

My main dish consisted of assorted beginner’s sashimi: tuna (fatty and belly), salmon, arctic surf clam, Octopus and Yellowtail. I noticed the salmon was of the farmed variety than wild, and that’s a strike. I would have preferred a wilder variety, but not all fish can be harvested throughout the year. Some product is seasonal.

The presentation was wonderful, and I had half an apple neatly sliced to help sweeten my palette between proteins. There was also carrot, sprouts and daikon to really make this serving a meal. But I was still hungry for more. Even though I had a very tasty monkfish liver appetizer, I had to be careful on my budget and pondered what can I get that would salivate my tastebuds.

While the servers were busy, I asked one of the chefs to make up a unagi roll, and I watched them at work, using a little torch to bring out the scorched flavour. That did the job to get my hunger going again, and they were really accommodating. That alone deserves praise.

Eventually, the servers came back to refill my glass of water. Next time, however, I may look at their sake offerings and maybe I can find the elusive flavourings I saw from The Gyoza Bar in Vancouver. Although I’m well stocked in Ichigo, there were two others which I’m keen on. And when considering jelly sakes are available, I’m feeling adventurous! 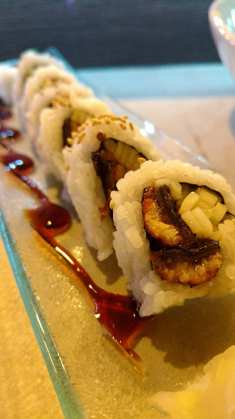 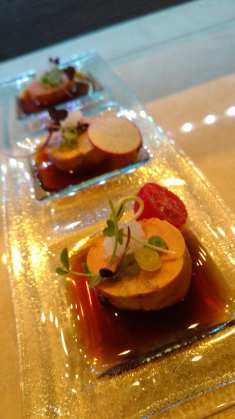 One thought on “How Nouveau is Nubo Japanese Tapas?”