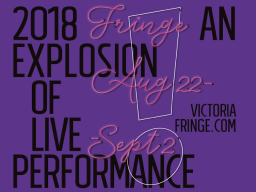 The 2018 Victoria Fringe Festival is full steam ahead, running now till Sept 2, and the following takes are from the first three days.

Monday’s lineup is light, but when many exciting events are happening in the garden city of Victoria, BC, to cap off the final dog days of Summer—including Greek Fest over the long weekend which I will one day return to (I hope they’ve found a method to keep away wasps) and the 25th annual Blues Fest (Aug 31 to Sept 3, always a terrific staple at the Inner Harbour) coming up in the region—picking and choosing was very tough!

Even a new creative arts studio, Kre8, is getting into the act! They offered late summer classes for those in the arts interested in getting into professional voice-over work (the theme for this season). Their sessions mix up a bit of Ted Talks with workshops. Some have the knack for it and others trained for years, but get into any specialty does require guidance. Winter classes are being prepared, and for this school, it’s about being able to get your vision out there instead of keeping it known to a small group of friends.

For the Victoria Fringe, my reviews will come in package summaries. In addition to these posts here, please visit the sister site, Otakunoculture.com for even more reviews. The links go to showtimes and online ticket purchasing.

The Great Little Show (LOCATION: Metro Studio Theatre, 1411 Quadra Street) is not going to be like the television program The Brady Bunch but that was part of the vibe. The sitcom elements were not there, but plenty of bubblegum pop music was used. The better analogy is in how their press release described the songs: It’s more in the style of Sesame Street.

The DeviANTs is a self-named musical theatrical comedy troupe that rose out of Lifetime Network’s Drama Club program and they featured adult artists with developmental disabilities. To see them overcome stage fright deserves the most praise of all, because that’s never easy. Whether they are playing to a small audience or big, perhaps the biggest obstacle is not from them, but rather us in accepting them as talented performers.

I could hear problems with harmonization and ignored it. The original songs written for the gang to sing is more about school life and togetherness. Issues like bullying get covered. The tunes are poppy enough in a Partridge Family style of freshness, and I like to think of this production as Glee.

The best voice has to be from Catherine. Her “Don’t Wanna Talk About It” is almost like “We’re Not Gonna Take It” but minus the heavy metal. Not everyone is going to be inclined to see this show at the Victoria Fringe Festival to support this endeavour. Thankfully, there are other ways to help out. All they want is ti be happy and accepted. They will return that in equal measure.

Vic City: Underground and After Dark (LOCATION: 1415 Victoria Event Centre) is an improv comedy act which seeks to tell varied stories about what defines Victoria, BC. This homegrown act is part of this year’s Fringe Festival goal to offer more local productions than touring. I can at least report what Jonah McKeen has created can get locals laughing out loud regularly when they completely get the joke. I chuckled at some moments and others, I guess I’m not up with the times. When considering I have lived here for all of my life, more than three decades, I would notice.

Ideas are taken from the audience and both him and his pals Olivia and Chad’s take at the issue on the new bicycle lanes and deer make up some parts of why I gently laughed. The rabbit problem around the University of Victoria has been fixed, and well ….

The performance of all that’s bleak (as this show title implies) can only work if the ideas given from the audience are there. The show I went to was light on the sinister, muddled with not blending a few ideas coherently, and needed more satire. The night almost got Monty Pythonish when they walked in dressed in robes and handle candlesticks, which would have been terrific, but did not go far enough. I was not looking for nods to Frank Miller’s Sin City either. Would that have worked? Most likely not.

The cast is very likable in a Harry Potter type of way. They are a trio and play off each other in light-hearted ways. Perhaps another night is in order, where the suggestion box has a crazier selection to work from. The night I went did not quite have all that jazz I was hoping for.