Cenote is a fun little nesting place to dine in. They do host small performances (music) at night. I often walk past it and often wonder if hipster style diner is for me. The place was recommended by one former employee of the Victoria Film Festival (I wish she still worked for them) and a few friends who live downtown. When it’s located underground, down a level on Yates st., next to Lyle’s Place (or is that underneath?), seeking some places out reminds me of a certain movie. As Above, Down Below was an okay horror film about encountering strange evils in the catacombs beneath Paris, but I can think of better.

The etymology of this operation’s name does speak to me. Not everyone knows the original word is Mayan in origin (dzonot), meaning “well.” That is, unlike a traditional design of an aqueduct, the pipe connects to an underground body of water to which citizens can draw water from.

Since I don’t work downtown and generally frequent for my nerdy needs, where to go for a snack will vary when the mood strikes or where to meet. I suggested this place to Don Kennedy since its right next to the Odeon. He sums up his experience with one sentence: “Lamb mini burgers are legit. The rest is noise.” 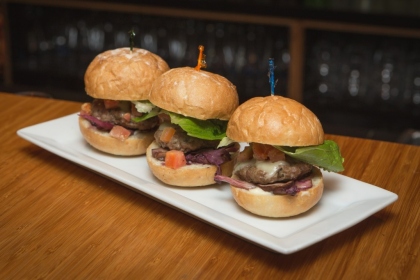 We were here for a quick bite, before a film. We were not necessarily in food review mode, but I can’t help myself. After many years of in the food and movie culture scene, it’s become second nature for me.

The snacks come fast and we did not feel too rushed. From their weekly specials, an open mushroom sandwich. Well, more like a forest of fungi for one guy to sample, and it tasted mostly of one variety than a bounty of others. Once cooked, some of the flavours can become indistinguishable when mixed. I feel their daily specials are just as legit, and since their menu cycles every so often, what’s missed one week may be gone another. Although with Autumn in full swing, more morels may come into season.

We also had a regular sized plate of nachos. We didn’t finish it off since we had to make sure we got to the movie theatre in time. Nothing special can be said about this traditional pub food staple. I’d return for their specials over their regular fare.

In what’s worth noting though is Cenote’s expansion operation. Sidenote Cafe & Soda Shop is worth visiting! They’ve been running for a few months now, and the drinks and snacks they offer are very tantalizing. I feel it has the same ambiance as Starbucks Reserve Roastery in Seattle, and both are certainly worth a visit.