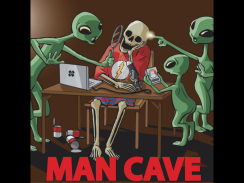 When the world is about to end, ala Chris Nolan’s Interstellar with all the loss of natural resources going on, Tim Mooney is sure to survive. His one-man show, Man Cave, a One-Man Sci-fi Climate-Change Tragicomedy is set in the future (2029 to be exact) and global warming is at the forefront of all damage going on. Although only a decade away, what he says is a touch uncomfortable since it suggests we have time to reverse the damage. After seeing Freeman the Handyman‘s Timeline for Homo Sapiens last week, you’d think the producers of the Victoria Fringe Theatre Festival would pair the two shows together for an evening of T-talk and radio show about the decline of civilization (and what we can do to fix it).

In this possible projection of the future, Mooney knew it was coming. He prepared for it. When those fire tornados are getting worse, he knew it was time to hole up in his bunker somewhere up North. The ‘Man Cave’ is not just about the nerdy sci-fi stuff he’s into but rather it’s a bunker prepared as though he’s expected a nuclear war to happen instead of a world besieged by Mother Nature at her worst. While he injects a good bunch of sci-fi references, pop culture includes influential music and art too. He does mention Andy Warhol, which I appreciate.

I’m hard pressed to say if his character believes Klingons and Vulcans are real. Instead, it’s about following the ideals set in stone by visionary Gene Roddenberry, and he follows on the heels of this idealist storyteller.

This performer’s delivery offers giggles at the right time, and I firmly believe he’s channeling the authority image of George Noory with the impressionable voice of Casey Kasem in his own version of Coast to Coast. The topics are appropriate to this subject, and had to pay the licensing fees for song use had not been an issue, I suspect this performer would have considered including tunes to highlight the topic at hand. I can easily hear Kansas’ “Dust in the Wind” and John Cougar Mellencamp’s “Rain on the Scarecrow.” An even more powerful song, in my opinion, is Midnight Oil’s “Beds Are Burning.”

As a monologue on the species-wide inability to address global warming, I don’t think Johnny Carson would have spent this long on it. This show can be shorter by 10-12 minutes. Thankfully, Mooney’s voice, projection and delivery is strong. He wants to be heard, but if anyone is listening (namely the aliens he’s broadcasting to), that’s anybody’s guess. Much like the cinematic counterpart, Pontypool, it’s up to Mooney to be a voice to keep things stable. Outside is chaotic. Ultimately, it’s lights out and this show offers food for thought for those concerned in where humanity is headed. It’s not too late to change!