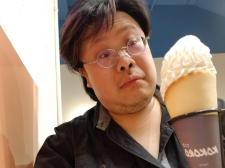 When Japanese tradition gets nouveau, it’s time to hit the Kokomo! Japanese Chef Takuma Ishikawa invented the mazesoba dish and has expanded the franchise out to Vancouver. I’ve been busy of late with my other preoccupation (fandom/comic conventions) and when hunger strikes, I still pay attention to my foodie desires. This large diner has been the talk of the town since it opened two years ago. When I heard fellow Fan Expo Vancouver attendees talking about where to go for ramen, my ears perked. A hop, skip and jump of about four blocks had me faced with the difficult choice of which one of the three dishes should I have? Should I have ramen, a don or mazesoba? 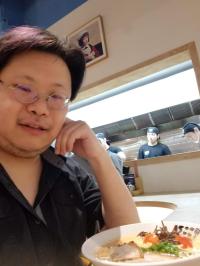 It’s tough to vary ramen or mazesoba up unless you add something drastic or be creative to the dish. Their zenbu mazesoba dish, the most expensive, wasn’t too spicy. Once when I added some vinegar to smooth the salty taste, I couldn’t stop! The raw egg used is most likely free-range and straight from the farm instead of wholesale. While I typically make instant ramen at home “dry” too, I never thought of adding a raw egg on top and minced pork. But that’s instant stuff. The soba I find is nothing like what’s made here.

The secret to this franchise operation’s success is in what they do in making the noodles. Japanese water has a different mineral content and not everyone will notice. I feel the secret is in the pork. I oink you not, it was superb; the fine cut and scents from how it was smoked tickled my senses. Aside from not crisping up the nori for a smoky flavour and offering a large bowl of this lusciousness, it was a half a dinner by my standards. I wanted a second bowl.

The bright lights and modern trappings don’t hide the open kitchen. Depending on the time of day, seating is quicker at the bar. Just like the old school ramen shops, you hear the shouts of welcome and goodbye as diners come in, have their meal served fast and furious, and head off (back to work). In other hours, you’re allowed to stay longer. I’m glad to not have the feeling of being rushed out the door when my dinner was done.

I was glad to see my order get delivered fast. The ramen takes time to pork up, or in my case–carefully balance the strong tangy tomato taste with the elegant broth so my buds can do the marimba. This dish was extremely tasty, and I need to learn how to make this at home. The corn helped balance the sweetness of the tomato. Even though I ordered a large bowl, I was still feeling hungry. Thankfully, a usual order includes a side, to which I should have ordered two tapa-sized dishes than one.

The salmon sashimi kept my appetite going, but I still needed a visit to the Gyoza Bar located around the corner afterwards to fill me up.

On my next visit, I had their octopus salad with wasabi root, and it was a crispy delight which had an unexpected aftertaste which had me needing to be cooled down afterwards. I tried two of their in-house made products, a blue lemonade which made me think of cooling off in Hawaii and a soft-serve ice cream to sweeten my palette and cool down the hotter zenbu that I ate.

When you’re in a rush, my advice is to alert the waiter or waitress that you’re ready to pay the bill otherwise they won’t know. Unlike smaller operations where it dash in and out, you can take your time here and afterwards enjoy the night life that is Vancouver.

Next up for me is Seattle for Emerald City Comic Con!