Devour! 9.5 is Wolfville, Nova Scotia‘s ultimate film and food festival. This year, they’re going online because not everyone will head out to get their taste of two worlds. I’m glad this event is happening, and though I could travel out there to it, I’m still saving my monies for when certain comic book conventions starts up again in 2022.

When compared to at home in Victoria, British Columbia, the decision to not run Feast and Art of Cocktail (which would have took place this month) by the organization which runs these events is a wise one. We are a bigger town, with a greater chance to spread a certain virus and when compared to Wolfville, perhaps it’s best to run with the wolves.

I’m glad to discover that across the country, I can still get my mohito from the agricultural heartland of Eastern Canada. Plus, and it’s a thriving wine region! Ice Wine anyone? For anyone missing a feast for the senses, I’m happy to report that I’ll be covering this event remotely and hope I can get some of the non-perishable treats couriered cross country. This festival promises to be a good one.

I corresponded with the organizers to learn more about this event. 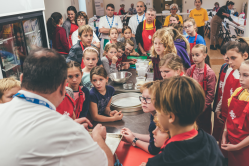 Could you please introduce yourself and this festival.

Devour! The Food Film Fest is the largest film festival in the world dedicated to all things culinary. We produce our annual festival in Nova Scotia in late October and 15+ satellite events around the world from Berlin to The Bahamas from Los Angeles to Jasper and year-round.

We were just about to enter our 10th anniversary year with an anticipated 15,000+ attendees coming to 100 events just at festival time…and then the pandemic hit here in March…and we were forced to come up with a new plan. Through the Spring/Summer, we watched festival giants fall, but we had the luxury (if you can call it that) of a bit of time, to figure out how we could safely deliver the event…and now we are less than a week away from what we’re now calling Devour! 9.5.

There are two of us who run the festival–Michael Howell, Executive Director and Lia Rinaldo, Managing Director–between us we have decades-long careers in the food, film/theatre and events world with a fair amount of crossover.

What makes Devour! different from other Food Film Festivals around the world?

We are the largest culinary festival in the world in terms of the sheer depth and diversity of our programming–there are a number of food festivals or food film festivals who really focus on the film aspect or are mostly food events. In a normal year, we produce a full range of experiences with an average of 80+ new food films from the global circuit, celebrity chef dinners, culinary and beverage workshops, parties, film panels, experiential tasting tours and more.

This was our tenth year, that we’re now dubbing 9.5, hopefully we will be able to go back to a new kind of normal by 2021 and give this milestone the celebration it deserves.

Who does the programming and is it hard to find foreign films with that food theme? It seems Hong Kong/China often has a lot of food comedies, and would love to hear your take on why that is.

We share the programming duties mostly. Even in this exceptionally weird year, we still looked at over 300 titles to pick the 44 films that we will stream online this season and socially distancing in our local theatre.

One that comes to mind that we loved but could never make happen by virtue of timing and theatrical release–Mr Long, where a professional hitman retreated to a small town and opened a ramen cart in hiding that got too popular…hilarity ensued.

With COVID-19 forcing a lot of different community events to adapt, what are you doing to ensure safety to those attending the physical event?

As the world appears to be heading into a rather intensive second wave of this virus, and even with other parts of Canada shutting down, we are actually in the ‘Atlantic Bubble’ here in Nova Scotia, which is turning out to be one of the safest places on earth right now.

Our plan is to host 40 events over 5 days; We are streaming our film program online and socially-distanced in small numbers in our host theatre. We are also presenting culinary workshops and a few film chats that will be streamed to the world. We dropped our celebrity chef dinners for 200 and all of our parties, and focused on the community events that we could deliver mostly outside. So, there’s lots of ’to-go’ food and bike rides and a couple of evening’s at a local drive-in.

We are poised at this moment and if anything changes in this week–we will retreat online. We have claimed more space than most since this all started, so we are feeling pretty lucky in this place.

If this pandemic lasts for a few years, what are your long term plans?

We have been a destination event to date. Streaming and socially spacing are new to us (and everyone) this year, and this is forcing us to access and beta-test the technology that will hopefully work and allow us to continue. If we go back to normal, we will likely still have a streaming aspect. It’s the future.

We would look to delivering more food based content to homes should this continue.