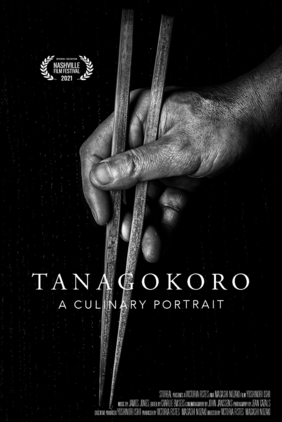 Plays with the Feature Film, Come Back Anytime

Long time readers of this blog will know that I love sushi. After watching Tanagokoro: A Culinary Portrait, I don’t think I can look at many local Japanese restaurants the same ever again. The practice of Ikejime is not everywhere and this short documentary really extols the virtue of what it means to be an ethical chef. That is, to harvest the food in a way that won’t stress the product so that you’ll get the best flavour hitting those taste buds. In this work’s case, it’s all about how to best catch that fish, keep it alive and slaughter it before hitting the dinner table.

Victoria Fistes and Masashi Nozaki are both the directors and producers of this work. They produced an excellent look at the man who’s trying to revolutionize an industry, one country at a time. Victoria is a filmmaker who has worked on commercials, short films and documentaries. She’s best known for “Being Ernest,” which shares the experiences of a young blind boy. More recently, she has worked as an Assistant Producer on the documentary “Misha and The Wolves“ and as a Production Assistant on “The Reason I Jump” which won the Sundance Audience Award in 2020.

Masashi has an immense passion for culturally connecting Japan and the world. He is a producer/director who provides consultation to national companies and collaborates locally on projects with creators.

I had a chance to correspond with the team about this work:

How did the idea to do a one part biography and another part investigative documentary come about?

The idea to create a documentary that was partly biographical and partly investigative came quite naturally as we started to discover more about Chef Yoshinori Ishii. Initially we were focusing on the biographical aspect as we were curious to learn more about Yoshinori’s upbringing, his career path and his success in obtaining a second Michelin star at UMU.

As we learnt more about Yoshinori’s experience in London, it soon became clear to us that he went to great lengths to change the quality of fish in London. His pursuit for fresh ingredients and his introduction of the Ikejime fishing technique contributed greatly to achieving the restaurant’s second Michelin star. The more we talked with his fish suppliers the more we realised that Yoshinori’s relationship with them was unique because he took the time to connect with the fishermen, meet them, observe their work and ultimately teach them a more ethical way of fishing. This was not very common for a chef so we felt we needed to explore this part of his story further. 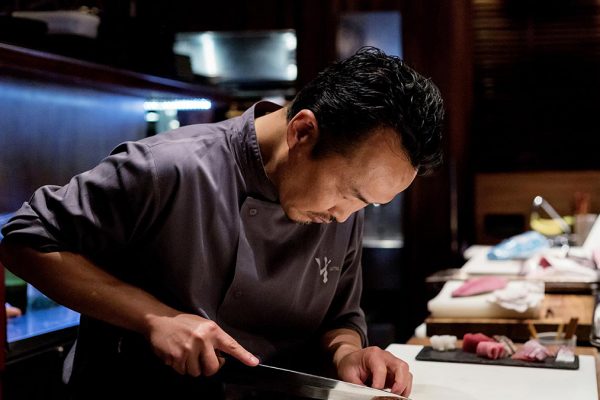 How would you break down Ishii-san’s career, since he’s moved around lots during his various tenures at different restaurants?

Yoshinori Ishii moved around quite a lot during his career of nearly 30 years. He started his training at one of the top kaiseki restaurants in Japan, Kyoto Kitcho which holds three Michelin stars. There he developed his talent for Japanese cuisine, calligraphy, pottery and flower arranging. He spent close to 9 years training under his mentor Hitoshi Ishihara until he then decided to travel abroad to spread Japanese food and culture in other parts of the world. This led him to move to Geneva where he became chef for the Japanese Ambassador of the United Nations for 3 years.

As a man of nature and an avid fisherman, he spent much of his time in Switzerland and Europe, traveling, exploring the mountains, seas and rivers, always searching for locally sourced ingredients. His work alongside the ambassador, eventually brought him to New York where he spent several years working at Morimoto as an Omakase Chef. During this time, he received the reputable Rising Star Chef award and was shortly after offered a position as Executive Chef at UMU in London where he went on to work for the next 10 years.

I saw in the credits that Yoshinori was the executive producer. Did he approach your team, or was it the other way to spotlight a “fishing industry that doesn’t want to adapt?”

Yoshinori gave us his full support throughout the making of the film. In terms of initiating the project, it was actually the other way around. My co-producer, Masashi, who was studying filmmaking in London at the time, had initially approached the chef as he was particularly interested in creating a documentary in the United Kingdom to share Japan’s deep culture through food. Yoshinori seemed like the ideal subject for this documentary as he is a master of kaiseki, one of Japan’s finest multi-course meals that traditionally accompanies the tea ceremony. Although we didn’t initially intend to spotlight the fishing industry, as the production developed, we realised that fishing and particularly Ikejime was an integral part of Yoshinori’s story that needed to be told.

With the Ikejime technique to preserve the quality of the fish, how much of the global industry would you say has adapted?

In Japan, there are a variety of Ikejime methods. Some of these methods have been the standard for improving the quality of fish in Japan for the last 300 years, whereas in many parts of the world it is still a relatively new technique which is only being discovered now.

It is difficult to say how much of the global industry has adapted, however in Europe, Ikejime is starting to be applied more frequently. For instance, when we were filming in Portugal one of Yoshinori’s fish suppliers informed us that ever since Yoshinori taught his fishermen the Ikejime technique, other restaurants have been requesting his company to provide Ikejime fish because of the various benefits that come with this method. The main problem that this technique poses is that it requires more work and time from the fishermen and with the current infrastructures and existing ships in Europe it is difficult for Ikejime to fully develop as it has in Japan.

How much more work needs to be done?

In comparison to Japan, I think it is fair to say there is still a lot of work that needs to be done. Yoshinori mentioned to us that the Ikejime technique that was depicted in our film and that was taught to the fishermen in Europe is one of the more simple methods of Ikejime. Progressively there are more advanced techniques of Ikejime that are being developed and applied in Japan.

In fact, there are elaborate steps which require more time, tools and equipment in order to reach the level of precision and proficiency seen in Japan. For example, in Japan, they actually have ships which are purposefully constructed with tanks inside the vessel so that the fish is transported alive back to the land. The fish are given time to rest. This allows Ikejime to be conducted in a better environment and more quickly, which reduces the stress caused to the fish and improves the overall quality of the food. And that is actually the original purpose of Ikejime: to consciously value the life of every single fish whilst maintaining the quality of the product.

For those wanting to know which restaurants are doing their thing, is there a guide where people look to find the best in the Pacific Northwest and East Coast? (Canada or USA)

The Michelin guide is generally a good indicator of the quality of the food and ingredients one can expect at restaurants around the world. Although it has been a long time since Chef Yoshinori Ishii has been to the USA or Canada, he mentioned he would usually favour restaurants there that use fish from Japan. He also cautioned us that some restaurants nowadays inappropriately use the Ikejime trademark and name to commercialise their business and enhance their reputation, when in reality their fish has not actually been treated with the Ikejime technique.

One thought on “[Interview] The Mission Behind Tanagokoro: A Culinary Portrait”