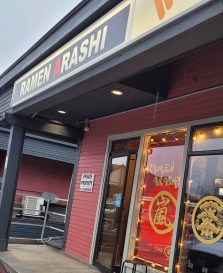 Sugoi! Victoria ni atarashī totemo oishii rāmen-ya ga arimasu yo. As for whether that’s grammatically correct, I think I got my statement right and insert a pun for good measure.

Ramen Arashi is a diner that opened over the holidays. I’ve been keeping tabs on when they’d open since they’ve been making noise mid last year on the social media front. They’re not competing in the busy downtown area, and I think they’re likely to carve a niche in Burnside. They’re located a few blocks south of Mayfair Mall and I’d visit this operation in a heartbeat. Their bone broth has a nice additional peppercorn flavour.

Arashi is very new. I wanted something hearty and this meal certainly delivered. Besides the traditional toppings of a half egg, spinach, bamboo shoots, crushed peanuts, chilli oil, garlic and green onion, I opted for more chashu and shrimp. The nori was nothing sophisticated. I’ve seen some places go over the top with this seaweed, and often it’s done when sushi is offered rather than for ramen. 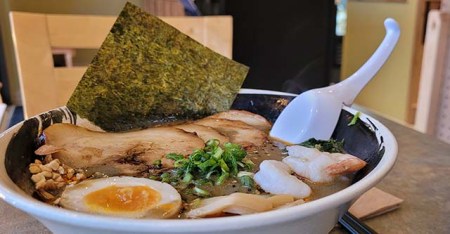 The noodles taste better than Ghost Ramen’s. What’s offered here is a lot more springy and has more colour. One detail I appreciate is that the noodle makers here consider weather conditions and adjust the ingredients accordingly for each batch made for the day. I could’ve gone for a second serving. I also ordered shrimp; sadly, they’re nothing special. I’d rather pay more for the sweeter Argentinian variety.

Arashi’s menu offerings are far more traditional when compared to the designer places I had in Vancouver. Yuji Yokomori and Ken Seki started this operation in Banff and over time, gained a devoted following. Two other locations include Canmore and Las Vegas. In this city, they’ve partnered with Allan Nichols to open this latest.

I should also note this place shouldn’t be confused with the Seattle based restaurant of the same name. The logo design between the two are very different.

One item I can’t get enough of is their homemade yazu ice cream. The Japanese version of this fruit is delicious, and I rarely see it at The Root Cellar. As for what’s next, I’m hoping takoyaki will be a feature in the future. This operation plans on introducing a few more items and I can’t wait to see what they are.