In a small town like Port Angeles, the primary industry is fishing and tourism. In October, it’s the 21st Annual Dungeness Crab & Seafood Festival. For the adventurous hiker, there’s Hurricane Ridge and the Olympic Mountains, but they are typically closed when the seasons change. Because there’s plenty of rainforests nearby, harvesting mushrooms (as my review from a few weeks ago explored) is no doubt next.

This highlight of my meal had enough earthy flavours to make my mouth water. I could’ve easily ordered another roll, but after my meal at , I was feeling quite full. The smaller tuna and salmon rolls weren’t too bad either, but they’re no step in when compared to other operations I’ve been to. The softer flavour indicates they are local, but I wouldn’t rave too much about it. When coming here to dine, people will be looking at the speciality rolls than regular.

As for the hibachi, I’ll have to come back on another trip, so I can truly savour everything Songoku offers. According to other reports, this operation is very much loved, and they’re only one of three Asian restaurants in town. When the craving hits, it’s tough to decide which one of them is worth hitting. The other two include Sabai Thai and Asian Cafe. At least the gambit’s covered when that craving hits. But for me, it’ll be this place, since I just need more crawfish! 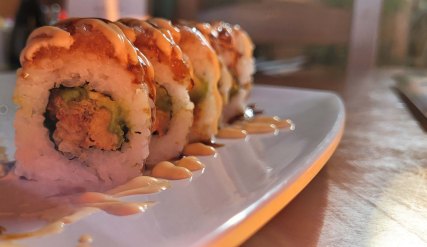