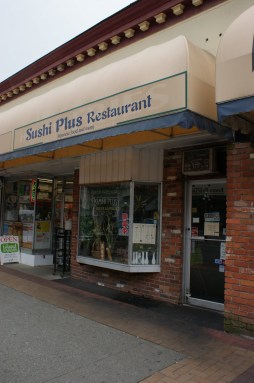 E: James expounded strange wonders and the thrill of going to this place for the first time and all I did was pull a Mr.Spock. And I can’t say I was too thrilled at the presentation. The meal was mildly tasty, but it was more reminiscent of what a street vendor would do. And I had the authentic experience too while in Japan.

J: Blahdy, blahdy, blah, I’ve been to Japan. I knew this was coming. Just because I am yet to visit any restaurants in Osaka doesn’t mean I’ll never get the chance to enjoy some international scenery. Visiting a Geisha house is at the top of my list. And a nice Sunday afternoon at Sid’s Cafe in Holmfirth, sipping tea, wouldn’t hurt either. Sipping green tea here, at Sushi Plus, was another matter. It had no taste.

In my sunomono salad ($1.75), the vinegar didn’t overpower the ingredients but it did not enhance them either. It was all rather bland. To make matters worse, the disposable chopsticks from Touch Industries Sushi Plus left on my table were leaving a undesirable wooden taste in my mouth. This might’ve been due to the chopsticks being kept in storage for too long.

E: You should try swimming the murky depths of their ramen noodle soup. All there was were beef, onions and noodle. I felt that there was a lot missing to the meal. I would’ve appreciated some nori (seaweed) and marinated ginger as a side to help give the meal substance. I could have asked the chef for some, but found it odd that there were no waitresses around during a solo visit. I overheard part of a conversation with the chef to what I assume was a regular patron. Simply put, he said they were late and didn’t seem all that upset about it.

J: Right you are Ed. Their ramen noodles although tastsy had less punch than a club fighter. And don’t get me started about it’s appearance. I can safely say Sister Wendy won’t pause at my table when next they bring me my bowl.

For what I ate, the Marine bowl is alot of food for $7.50, and I believe most people could easily fill themselves on this dish alone. What arrived was a no man’s land of food. It literally looked as if a miniature battle of the somme was taking place. The teriyaki sauce made the whole thing look very unappetizing.

With the exception of the rice and the onions, I honestly could not tell from sight what I was eating. The sauce was too heavy. The rice didn’t fare much better and tasted overcooked. The onions were congregating under the rice near the bottom and it interrupted the flow.

E: Maybe this place is family run, and when hired help is sometimes hard to find, I’m willing to bet that Sushi Plus has to roll with the punches. Especially in downtown when there’s a lot of Japanese restaurants of higher quality caliber right around the corner. I’ve walked past this place many times in my trolling up between the post office and London Drugs when I’m in the mood to shop.

And just by looks alone, it will forever be an abandoned temple in my eyes. Only the cash strapped will want to come here on a regular basis. But since I don’t carry my bull whip all the time, I’ll go treasure hunting somewhere else. I went to this place before and published my thoughts at the college paper I write for.

J: The service was slightly lacking during my visit but I firmly believe establishments like these have their place in the universe, much like some southern state truck diners.

Overall this was a below average experience. But according to the customers during my visit, I was definitely in the minority. I firmly believe if you want much food for very little money and you are on a budget, this is a place to go. Be sure to ask for a customer appreciation card during your next stop.

E: I couldn’t agree more. Onwards and upwards… so where’s our next adventure?

J: Anywhere we please my friend in any part of the world. We have our pen and pad. I have this neat little book with the title “Don’t Panic!” in large letters on the cover and you have your professional camera. But I will state now, if you drag me to any cafe where bad poetry is recited, you’re footing the bill.

4 thoughts on “Sushi Plus or Minus?”