E: Avast ye mates! Shiver me timbers and gimme a beach to land on. Where I be today is at the Reef. In the Caribbean and ready to sample some rye. But, it’s really a bottle of rum that I seek.

J: Add tasteful mosaic tiles, one lifeless parrot (Monty Python sketch not included) and a bar that’d you expect at a beach, that’s only scratching the surface.

I rather enjoyed this place and I grooved to reggae music (or maybe my pants were too tight). Our friendly and helpful waitress even had that cock-eyed attitude that I love. If Blackbeard walked by and asked to use the little pirate’s room, I wouldn’t have batted an eye.

E: I could’ve waggled mine on something else, if you know what I mean. Wow, all those drinks. The one that caught my attention that I had to try was the strawberry rum flavoured ting. There was cachaca, pineapple and lime in it too, and I should’ve ordered something stronger. Well for roughly $6, it wasn’t too bad, but this was something I had to try.

J: You should’ve ordered an umbrella for that girly drink of yours. I wanted the more manly Newcastle Brown Ale but they were all out. Instead I settled for the Strongbow dry cider ($7). The menu clearly stated United Kingdom but instead the bottle said English cider made in Belgium! 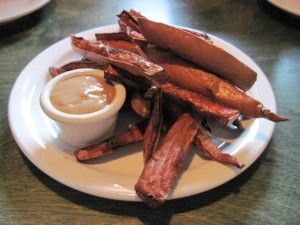 E: I should’ve gone for the spiced rum instead, but it was today’s special. They’re cheaper, so if you’re on a budget, it’s a way to go. Otherwise, point me to the gallows and I’ll come back on a dead man’s chest.

You’ll see me munching on fingers when I come back. Well, they’re actually Yardie Yam fries, and they were delicious. I was slurping off the dip more than the fries, but that’s only because the Jerk Mayo was damn good.

J: I concur. The mayo, although I wouldn’t drink it was the highlight of the appetizer. Perhaps it should have been it’s own selection. The Yardie chips were just too tough. The chewing was a chore and it shouldn’t.

E: Ye should try eating the Dominica Beef ($15). It was savoury, with a light kick to it if you want to pile on hot sauce on top of it. I loved the beef wasn’t an even cook. I had a mix of rare to medium to liven up the man in me. I could’ve asked for it blue. With mashed potatoes and some veggies (a nice large broccoli bushel and a carrot worthy) as my side, this was a balanced meal. And what, must I ask, are you to eating fish cooked, James? I’ve seen you eat it raw before.

J: Well the fish in the Maracas Bay Mahi ($15) was pan seared with lime and curry. I could taste the lime but I had no clue what happened to the curry. I’m a complete wuss when it comes to spicy food. But when I ate the fish and peppers together, there was some flavour to enjoy.

E: I suppose not all the meals are perfect, but I must say we blew our budget when it came to trying the desserts. They average ’round $6 each. Both the coconut cream pie and the deep-fried bananas were like digging for buried treasure. The latter meal included mango ice cream and a really soft cookie. The delight was our happy waistlines expanding, full with gold.