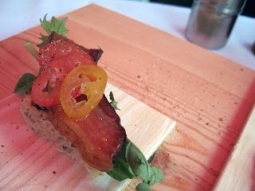 E: The community of Fernwood is a really nice place to visit, and I really wish I lived here. I feel right at home, and just attending their inaugural foodie fest is just temptation in action. Especially with all the good restaurants located here. To name a few, there’s Lucy’s In the Square, the Cornerstone Cafe, Fernwood Inn and Stir it Up. And all of them didn’t disappoint at this event.

J: And don’t forget the wonderful Little Piggy, Ed. I definitely felt very comfortable among the crowd. I talked with people I didn’t know, bumped into those I did and enjoyed the very social atmosphere that was Fernwood Bites. I’ll be planning a return. Aubergine is just one of a a few businesses that really caught my attention. They’re also highly regarded too.

E: That Moroccan Baba Ghanoush they made was great. I knew eggplant can be cooked in a variety of ways, and this one was as smooth as silk, pureed and kissed with peppers to make it delicious. I can easily devour them up like slugs.

They also offered samplers of some other signature dishes and I really liked their pickled carrot salad. It was soft and moist.

J: The leek fillets were very tasty. With the sea salt I almost thought I was eating something I had just fished from the ocean. And you can put a plateful of those peppers in front of me and watch the fat guy eating contest between Ed and I.

E: Yeah, I can easily put you under any day of the week James. But seriously, the duck une fete … Uh, I’m just going to call it a duck burrito.

When considering the list of ingredients that’s in this one (blood orange marmalade, a buckwheat crepe and watercress), it felt like I was eating a multivitamin. I loved the overall combination of flavours in this one. 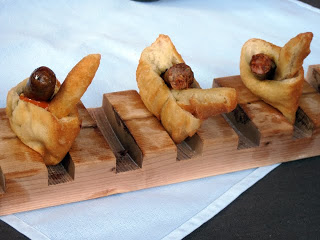 J: But as we go from healthy eating to the more questionable I think my heart stopped, Stage’s lamb and pork sausage in a pocket was a full on meal. Yes, it was greasy but sometimes a little bad is good for you. And it sure tasted good with a soft bread oozing humus.

E: I wanted to make a beeline to their table because the smell of their outdoor frier was better than honey. The deep fried lango pockets (a potato bread from Hungary) they were making up from that vat was crisped up fresh, and with that homemade sausage poking out from the pocket like a little honey bee’s behind, I had no problems being pricked thrice. I actually had more than that and could hover here all day.

J: We flew from flower to flower. Lucy’s In the Square had appetizing pollen in the form of an oven prepared pizza. The onions were done so well that it just melded with the cheese and produced a oneness on my road to further enlightenment.

E: I’m reminded of the pizza we had at Prima Strada during Defending Our Backyard many weeks back. After Lucy’s offering, I can’t even think of going back to Hothouse or Villages for their cheap lunch-hour $5 offerings.

I’d probably skip the traditional breakfast to eat at Parsonage Cafe. They offered a sampler sized and open faced, BLT. The sweet garden grown flavour of tomatoes over some wild greens proved this one was a pure delight. And I can’t resist bacon.

J: After all of that food, my tiny mind calculated that I could handle dessert and wine. Little Piggy’s lemon and raspberry cake was brought out later. Perhaps it was done to avoid any potential lynchings from returning customers. After their well received bison meatball, dessert was the next best thing to avoid an armed conflict. It was a beautiful small sliced cake (my waist line thanks you) that was soft and very delicious. Lemon and raspberry is a good combo.

E: For me, it was the banana cake from the Cornerstone Cafe. With some spiced butter, it made for a huge difference in taste. I thought I was sitting in a Jamaican plantation and enjoying a summer day. At least half of it is true.

But to cap off the day, I must say the Apricot Dessert wine went down like nectar. I could barely taste the sting of alcohol. At 9% per volume, that’s damn good and I’ll be buying from Elephant Island very soon.

J: On the other hand, I was having a working man’s drink with Blue Buck’s from the Phillips Brewing Company. I’ve tried a number of beers in the past and my reaction has been less than kind but Buck’s had a nice smoky bouquet and went down smooth. I’d rather have a keg of Buck’s than tackle that gin you forced upon me, Ed.

E: Gin will put hairs on your chest! Rum will do that too, but I had to give this local distillery a shot. This clear tonic went down more sharper than I thought.

J: I called it an alcoholic bath water which was no fair comparison. After all, the thought of the prohibition and the lengths people went through to make their own booze came to mind. But spicy? No. On fire? Maybe. My throat warmed up and various faces were made. I think that means I liked it. Let me take the bottle home and I’ll get back to you…in three days.

E: At least we were able to sober up over at Fernwood Coffee. Rob Kettner is the master alchemist. The attention he was giving in making the philosopher’s stone (a sampler sized cup of coffee) really caught my attention. After sipping the brew, I don’t think that’s a fair name to use for how it was made here.

J: It looked as though Rob had his junior science kit out on the table. He’s an easy person to talk to and I swear I know him from somewhere. I never forget a face. Maybe one day I will remember and collect the reward on him.