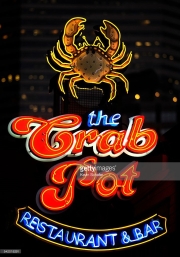 It’s been more than a decade since I last visited the Crab Pot in Seattle. Back then, it was known as a great place to hit by locals. And since that time, it’s risen in popularity.

I couldn’t help but be trapped by that thing tourists have to do, but when considering that three varieties of crab (Dungeness, Alaskan King and Snow) are offered in their deluxe Sea Feast menu offering, that’s what I was after. But I forgot that the meal had to be ordered in pairs.

Unfortunately, Yvonne is allergic to shellfish. But I was still able to go primal, and I resisted ordering one of each individual sized portions otherwise the meal would’ve hit epic proportions, costing around $80 USD. So instead, I tried the King Crab Legs Feast ($32.95) and I must say the only thing thar has changed was the wait.

On a busy Seafair weekend and we were lucky enough to be seated after only an hour, and service came within a reasonable amount of time. On any other day, I’m sure getting a table would be quicker. 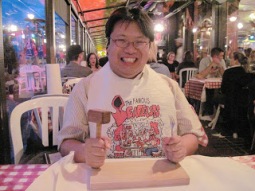 And although I couldn’t pig out on three varieties of crab, I went for the most expensive crab offering since I had budgeted for this dining experience. King crab does stand out as one of the better tasting varieties, with flavours reminiscent of being back out at sea, but there’s an art to eating crab if one wants to savour all it’s mouth-watering inducing qualities.

The shell should just be finely cracked enough so one can squeeze, twist and pull. With enough meat exposed and not looking like roadkill, it can be dipped in butter and slurped down like King Henry VIII wolfing down turkey.

I very rarely get to employ a more primitive technique of “Hulk smash!” because at Chinese banquets, no mallet is provided. We try to be more eloquent, and hot towels are provided at the end to wipe our hands clean.

And in those banquets, I get to dine on more shell. Yes, I become a zombie when it comes to eating crab brains, but I also love the guts that are found in the carapace too. The Crab Pot doesn’t serve that unless you order Dungeness (it’s offered whole in the individual sized portion), so I wonder what they do with all that goodness from the other species? I’d put it in a chowder.

And the day I move to Seattle, it’ll become the best time of my life; I can visit this place on a weekly basis. Apparently each restaurant is its own operation. They have branches reaching down to California. I thought there was a Port Angeles location too, since I traveled through there too. But back in ’06, I could’ve sworn the establishment was called the Crab Pot.

According to Google, it’s the Crab House. I’ll still try them out since it’s easier to get to from Victoria. Hopefully they won’t disappoint.