Note: This establishment has multiple locations. 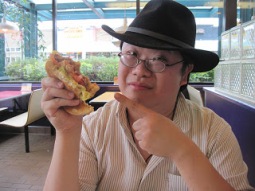 We made it! In Seattle and near the Space Needle, Yvonne and I tackled an American staple, the hamburgers and sandwiches that Kidd Valley serves. Located off Queen Anne Ave North, we went after the Firehouse Club. And it didn’t set me on fire, but instead had me simmering to the various flavours brought to life. The chicken had a level of spiciness that wasn’t too hard or harsh even for the most hardened of stomachs. 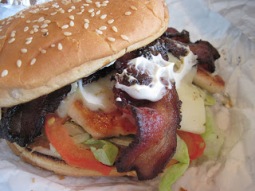 What we both appreciated was the amount of bacon added to this meal. The chefs here don’t skimp on it, and unlike Canadian bacon, these are large slices. I’d say there were at least four good pieces stuck in here. Each bite had a great crisp to it and I’m fairly sure I’ll be well packed before the camping part of our trip. I’ll have plenty of calories to work off in any hikes we may partake.

And for those who don’t know much about this franchise, yes, it’s like McDonalds, but I’d say it’s infinitely better. For those who don’t travel to the States much, Kidd Valley does a better job at serving a basic burger. They mix in what looks like a light mix of mustard into their mayo sauce, and it gets served to you while waiting at the table.

They’ll call out your name and you say, “over here!”

This kind of vibe existed back in the 50’s and the place had that feel too. There was a bit of nostalgia all around and the music was welcoming. And so was the smell of garlic. No, not the pungent scent those expect from freshly crushed, but from it being deep fried. They’re coated over a basket of fries and in volume alone, it’d equal two supersize me pockets. I have to thank Yvonne for ordering them and letting me get a taste.

While Kennebec fries is a huge trend in restaurants, it seems the everyman fry has a new visitor. Add garlic and all will be good in the neighbourhood.