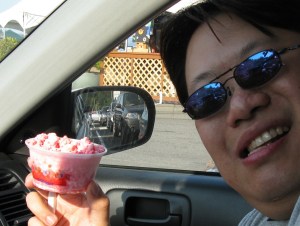 Road trips are fun, but sometimes it sucks to wait for a ferry to get Islanders off this rock. Let’s face it, while Vancouver Island can’t be done as a three hour tour, at least there are chances to go explore and do stuff, even if it’s at the Swartz Bay BC Ferry Terminal.

Yvonne and I wandered the market that was surrounding the building where Land’s End cafe is located. And we found two places to start our culinary journey.

Not often do we touch tourist food, but with a name like Galloping Goose Sausage Company attached to the hot dog stand, I had to try it out. The garlic smokie I tried was pricey. At $6.75, it managed to hold my appetite for quite some time, especially with my next meal nearly 5 hours later. That had to be damned good meat (on a whole wheat bun) in order for that to happen.

While I enjoyed the hot dog, I couldn’t help but wonder what’s next.

It was ice cream from yet another franchise operation. I was hesitant at first, because the Mini-Melt franchise is just another Cold Stone Creamery-like operation, but I must say I was impressed.

The $4.75 price for a medium sized serving was okay, even for a picky ice cream eater like me.

The legends of it being as hard as a rock is true; I thought I’d had to take a pick-axe to the ice cream when I first sampled it. And it does provide for a different way of eating ice-cream. Just when I thought it was another fad, like mixing ice cream over a frozen slab of rock, I wouldn’t go out to find more. But as a treat for the start of a vacation, why not?

I believe it’s all flash frozen so the ice cream can be shattered into tiny bits. And the more intensive flavour is not like eating a real frozen strawberry. But I do find it amusing to see rocket science used to make ice cream.

But better yet, late at night, the Krispy Kremes still taste the same; even if they’re not fresh out of the bakery. I’ve never liked Tim Horton’s because their donuts are denser. Their State-side competition provides a softer doughnut, and the quality of their products can easily be compared to Mister Donut in Japan. Yes, I’ve tried donuts in the land of the rising sun, and they were delicious! I have fond memories of my culinary explorations in Japan.

If I can find an outlet that does that doughnut hamburger that Yvonne was telling me about; I think I’ll be a candidate for a new exercise regime. I’ll die happy.