At the 5th Annual Victoria Tea Festival, one can sample nearly everything that comes from the coveted tea leaf. Whether it’s rooibos, green, black, or yerba maté, there’s certainly something to be found, even for a berry enthusiast like myself.

There’s a lot to partake at this show and I enjoyed the various scents coming from the sample cups of tea. The show can be experienced within a few hours for those who are simply shopping. But if anyone plans on skipping the presentations, they’re just going to miss out on one of tea culture’s many secrets. On Sunday, Jasmine Wong, a naturopathic doctor is giving a presentation on medicine and tea. She’ll be talking about the health benefits and risks associated with drinking certain types of tea.

And when considering what I sampled, I’d have to say one should give a few minutes between sips so the mouth’s taste buds is cleared with one’s own natural enzymes. Be warned: most of the samples are served at proper hot temperatures. I alternated between sampling the small variety of foods to finding my next cup of matcha green tea.

I tried a pure blend from DoMatcha, which was very nice. It was made on the spot and whisked to give it a frothy, smooth flavor. I enjoyed it, but given there were other competitors in the same building, I tried what JagaSilk offered and was blown away. With a dash of black pepper, sprinkle of pure grade cinnamon and use of cane sugar (all as fresh as it can be made for a dry packaged product), I enjoyed what I sipped. They used butterfly grade green tea in this concotion.

Whenever I’m downtown and in the mood for more, I’ll certainly be visiting their storefront in Nootka Court to delight my tastebuds. To appreciate good matcha requires an investment of a few items, namely a specially made whisk made of bamboo (chasen), which can cost from $18 to $90, and knowing how to make it.

At home, I’ll be enjoying the mulberry leaf. Brewing this tea is easier than whisking up matcha. Its earthy taste makes my stomach happy. And in what Tula Teas offered, I surprised myself by not impulsively buying a few packs to take home with me. They do mail order for out of towners, and there’s a store called Plenty on the corner of Fort Street and Cook where I can buy it locally. At this show, I was on a quest for huckleberry to purchase instead. 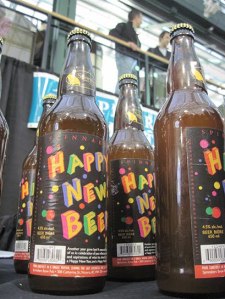 by Nancy Turner that this particular plant is also known as the bilberry. Armed with this knowledge, I spoke to Irene Drmla, the owner of Special Teas teahouse. She said I’d have to talk to special market suppliers.

Safe in that knowledge, I was off to try some tea infused beer. The Victoria Tea Festival worked together with Silk Road and Spinnakers to produce two blends—a Lion’s Head Cascadia Dark Ale, which gave the beer a mild taste of ginger and ginseng.

The other drink is based on a Belgian Witbier and it was infused with coriander and Silk Road’s blend of Chamomile Bliss Tea. It tasted very light in alcoholic content. The wheat they used certainly gave the drink a soft muted aftertaste. Appropriately enough, the drink is called Happy New Beer.

On Sunday, they had a Nut Brown Ale which had a flowerly aftertaste that I enjoyed. Rose hips and petals were used. If this drink is any indication, I suspect Spinnakers will be producing more rose flavoured ice cream when Spring arrives.

Of course, stocks for all their items will be very limited, so people will have to rush to Spinnakers Brew Pub to get their hands on one. And if this drink’s popularity is proving to be that well received, they may produce more something similar for next year’s show.

Food-wise, I found myself immensely enjoying their homemade pesto from Bubby Rose’s Bakery. It’s not as strong as the stuff one buys at the store. I can find myself slathering massive amounts over my pasta and not feel guilty.

Or I could savour the goat cheese made from Woolwich Dairy. One sample was enough to sell me on the taste of piri piri and paprika over the fromage. I could’ve bought two, but I was eyeing Beaver House Fudge, which were a few booths away.

I was happy to see them here at this show and the taste of orange sherbet in fudge form was enough to make me greedy. The combination works and I’ll be whistling on the way home with plenty of teas to last me well into next year’s event.