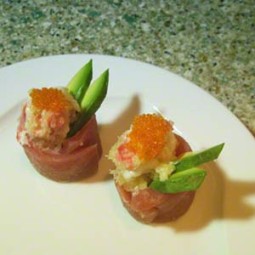 Nagomi Sushi is a restaurant that opened in 2008 in Whistler, BC. After sampling their mackerel in their Saba-Bo Sushi platter ($14.50), this place had me whistling Dixie and then some. I haven’t had that level of fresh fish for a long time. When I bit into it, I knew I was biting into something that was fished out of the sea that day. I was more pleased to see some tender skin was left for me to nibble into.

And with a full fillet to fill me for the night, I had to wonder if I had room for the other two dishes I ordered. This one roll is enough to serve three, let alone the two gullets I was trying to make up for. But with a night of video editing before me, I needed all the brain juice that I could muster.

With this fish, all I could think of was how succulent the flavours were. There is very little I could find wrong. Other than a very generous amount of rice used in putting together this simple roll, I had to start peeling off the layer to discover what I believe is a mint leaf under the meat. I trimmed down the rice content just so the fish would stand out more.

But other delights were awaiting me, like their Kani Roll—a true seafood lover’s aphrodisiac. Maki style rolls have turned into an art form and these rolls are not for the price conscious. At $5.95, these two sweet crunchy delights were simply awaiting my approval. The savory center consisted of Alaskan King crab. And the tobiko and tempura bits made for a nice nimble crunch. With red tuna wrapped around this morsel, I was left simiply wanting more. The fresh avocados that were spiked into this maki roll made for a beautiful presentation. If two lovers were to kiss after nibbling on these delights, there would be massive amounts of tongue swapping going on later just to find those bits of tobiko (fish roe) left in the mouth afterwards.

Perhaps the flick of a dragon’s tongue would do a better job. Instead of something hot, the Red Dragon Roll ($10.50) is one that’d take getting used to. This isn’t a dish for everyone, especially if they’re looking for authentic Japanese. This one is more like fusion nouveau. I was expecting spicy hot, but was disappointed with a curry that lacked kick. The mango was okay but it wasn’t enough to satisfy me.

If I am to return to this place, I’ll have to visit the restaurant instead. I phoned for delivery. A word to the wise, the delivery service used within Whistler tacks on an extra charge ($7.50). You don’t order directly from some restaurants. They all use a centralized service. If I had known, walking to the restaurant would’ve been a better option if I wasn’t constrained by time. To visit this restaurant, all one has to do is to visit the base of Blackcomb Mountain and find the restaurant in the Le Chamois Hotel.