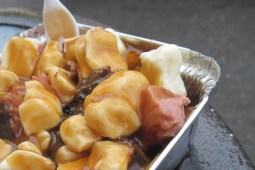 J: Hidden away in the wilds of Esquimalt is a little taste of Old Montreal at La Belle Patate (The Beautiful Potato). This joint is famous for their poutine.

E: … or dive, for lack of a better word. Janine and I chatted about what used to be here and I heard that this place was a laundromat once. I’ll have to do some digging to verify this rumour and to learn some history about the area.

At least in what’s here now, it has an old world charm. Instead of wowing customers with a beautiful looking building, I’m wandering some dark and dangerous streets that resembles East Vancouver. I haven’t been to Montreal so I can’t make that comparison.But at least the area exemplifies simplicity: authentic style cooking. You can see the order being made right in front of you than tucked away. And they have killer poutine, and I mean that literally. That’s because customers can stack it high with the extras at a $1 per pop. And I don’t mean, “just the basics m’am.”

There’s the choice of Montreal smoked meat in its own combination. That’s what I had and I loved every bite of crisped pork fat and juicy ham in the mix. Or one can have beef, mushrooms, peppers, jalapenos, green peas, egg, bacon, more curds piled on top–just thinking about it is giving me heart attack. 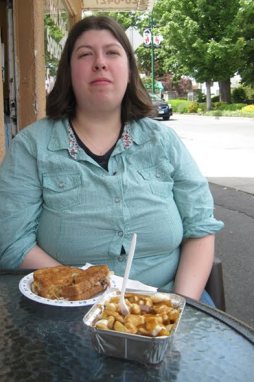 J: Those used to being asked for flat or sparkling bottled water may not find the ambiance desirable. But with its lawn furniture seats and freezer in the dining area, it has a certain je ne sai quoi. Despite the gravy being passable for the meat variety, it’s surprisingly vegetarian friendly.

With other establishments in town offering hollandaise sauce substitutes, among others, for the vegetarian variety of poutine, this was a welcome return to real poutine. The curds squeaked as I chewed, which is supposed to be a indicator of freshness. They were ample. Unfortunately they didn’t melt as well as I would’ve hoped.

E: I had the real meat gravy version and it was lukewarm, hardly able to melt the curds as well. I could at least dip my hamburger bun in it to give the bread that extra oomph. Apparently, fresh curds shouldn’t melt and that demonstrates quality control.

Much like the crazy monkey roll I had at Shiki Sushi, I was starting to make approving noises of delight.

J: I like to keep my squeals private, but Ed is not one to delight in a restaurant without the food reaching a high level of quality. The poutine was fantastic and it’s addicting. What it can to one’s waistline lies in the heaviness of the poutine itself. If one were to make visiting La Belle Patate a habit, the only silent sounds I’d make would be from the enjoyment of eating the poutine every time.

E: La Belle also makes steamies, hamburgers, and sandwiches too. I tried the cheeseburger and can’t say enough about the quality of the meat. It was like it was pounded fresh and there’s a very good subtle flavour in the meat. Their version of sauerkraut was spectacular too. It wasn’t as strong as real ‘kraut should be, and I highly approve of the combination.

J: I tried the other vegetarian option on the menu, a grilled cheese sandwich. The ability to add your choice of items was nice and I added fried mushrooms and onions. I wasn’t expecting gourmet, but I was disappointed that the flavour of the cheese that hit me was a Cheez Whiz like processed taste.

E: I’d revisit this place to try the rest of their menu before rendering a final bloke count. Or should I say weight gain?