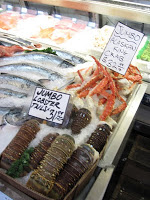 I pretty much had nothing but seafood in mind for my major meals during my stay in Seattle, and no trip is complete without a trip to Pike Place Market. This place is where anyone can buy fresh wares from both the sea to sky. Fruits, vegetables, meats and seafood were abound, and while I’ve seen enough of the flying fish act before, I was not going to wait around for the next time it’d happen so I can grab a photograph.

I wasn’t going to be that much of a tourist, but I did finally get a chance to wander the market, poke around at Golden Age Collectables, and find a few new kiosks offering food samples or some interesting artistic wares. There is an area where any vendor can set up shop and sell their products. On the day that I went, I talked to the fine folks at Stewart’s Meat Market, and learned they offer up jerky in other forms too. They sell game meats, and I just wonder what kind of red tape I’ll have to deal with to get ‘gator, crocodile or rattlesnake past Canada Customs.

At least ordering up some truffles will not be as hard. I’m talking about the real deal here and not the chocolate confectionary. I lucked out when I was heading towards Rachel, the Golden Pig, to be offered a coupon as well as a sampling of some delicious sauces and creams at La Buona Tavola – Truffle Café. I really liked the heavy earthy flavour of the woods in the black truffle cream. I bought a small jar (2.8 oz., $18.95) that I’ll be using with the pastas I eat at home. Maybe I should’ve grabbed the large one. Well, this place does mail order, and when I can, I’ll be nailing some truffle honey as well as slices of the mushroom to feed my gourmet taste buds. The prices here are not for the faint-hearted, but I’m willing to have a culinary to sate my needs.

Perhaps that’s a good thing I did walk around the block at least twice, and I sampled everything that I could find, and tried some new tastes, like the Piroshky Bakery. I’ll admit that I did not know what I’d be expecting from this place, but I went for something safe, a Bavarian sausage wrapped in a piroshky.

I knew that this was a type of generic bread common in Russia, but I never tried it. What I had was like a soft pie crust cooked around a sausage. I thought I was biting into a cloud of crispy fried air. It was super-light and fluffy. The next time I’m back, I’ll have to try the stuffed buns. Now those are the real piroshkies. I recall drooling over those the last time I was here with Yvonne and the gang from Washington State Paranormal Investigations and Research.

But in the meantime, I was salivating at the prices of some of the foods I found here. I found one fish monger that offered oyster shooters at three cups for $5. That’s a deal I couldn’t pass up, and it’s one way to get a satisfying quickie.

Being in the States only affirms one thing; they love ‘em large and the oysters that were shucked up could easily be turned into juicy monsters in a burger.

I was hardly feeling full either, so I settled down for a spell at Jack’s Fish Spot. They have a cozy Cheers bar like atmosphere that I really liked. With the open spaces, and the smell of the sea around me, I was getting very hungry fast. The wait for hot and fresh wasn’t all that bad, and in what I ate, it was fairly decent. I had to ask where the oysters came from, and I was told Hood Canal, about an hour’s drive away, so their product is still local.

The salty taste of the oysters was definitely prominent and they were juicy. But when cooked, the other flavours were not as pronounced. I liked them, but they don’t rank high on my scale of super delectable. I was given four fairly sizable pieces and that was enough to sate my appetite before Evil Dead the Musical that I was going to in West Seattle afterwards.