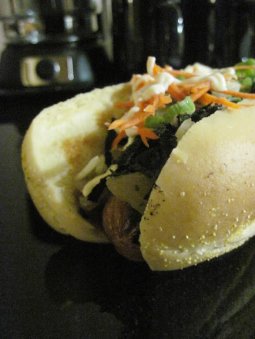 Nearly most of Seattle is raving about Gourmet Dog Japon, a street cart operation that makes some mighty mean dogs. But what’s so special about this fast food? Which operation is better? Supposedly, owner Shinsuke Nikaido took the idea from the Japadog carts in Vancouver and he put his own design in what makes a good dog.

My vote is for the Seattle location since they were open at 11pm on a Friday, just when most restaurants are closed. I imagine if I wanted a bite even after midnight, I’d find this particular operation still going strong.

The trick to this place is that they use three different kinds of sausages. A kielbasa is used in the Matsuri dog ($5.50) I ordered. With the combination of green seaweed (nori) and mildly pickled carrots on top, both condiments gave the meat an extra texture. The Japanese mayo gave the dog that tangy taste. The next time I’m in Seattle, I’ll be trying the other meat options which includes the traditional beef sausage and a miso varient. But my eyes are on the chicken-apple.

Other thoughts came to mind while waiting about six minutes for my hot dog: to recreate most of these ideas at home is not hard at all after seeing what ingredients Nikaido-san uses. A simple visit to the grocery store and a butcher will net similar results. While that will cost more in the setup, at least that’s a better idea when visiting Seattle or Vancouver is not an option.

However, if people are in town—why not? Gourmet Dog Japon has a bright future once when it decides to go into franchising and pumps up the volume. Can anyone imagine a sushi roll dog?

One thought on “A Tale of Two Hotdogs: Gourmet Dog Japon Seattle”