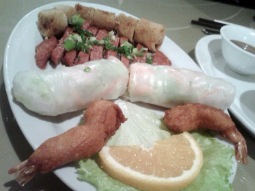 E: I am amused that 3 Vietnamese diners are nearly a block away from each other; that makes for some stiff competition. When James and I were looking for food, it was our noses that were guiding us. And I have to believe our tracking abilities guided us to the wrong place. Saigon Harbour was not where the trail led; but the signpost showing off one of their specials, a spicy prawn dish did.

J: The scent was coming from The Clay Pigeon but since Ed was the one who eyed what tempted his tummy, I didn’t have to make-up an excuse to dine at a cheaper restaurant. I must say the decor was nice, and again cozy restaurants are a plus. On their cash counter was a aquarium tank with a handful of very large goldfish. Watching fish is a good way to lower your blood pressure so they say. I only hope they’re not on the menu.

E: In looking at what this place offered, I thought I’d be treated to a colorful bouquet of flavors. Sadly, I was disappointed. The appetizer was very basic, and it was missing many things it claimed to offer from the “included list”, which meant we should’ve also had a spring roll, meatballs and deep fried won ton. All we received were a salad roll, a limp prawn, a mysterious deep fired roll of meat and panko fried ham.

J: One would expect me to respond with my insight but to be quite honest, Ed hit the nail on the head. I kept remarking how bland it all was. I spoke of the decor like it was a saving grace. It was the only straw I could grasp.

E: At least the won ton (which I normally see as a Chinese dish than Vietnamese) had a bit of flavour. That was our soup de jour; when the dish was allowed to be stirred. I liked the inclusion of some crispy broccoli. That does not often get served at a diner level.

J: The prawns and vegetables cooked in chili – garlic sauce and served on a bed of rice was adequate. The rice tasted a bit on the dry side but I managed to finish off my platter with no other problems. The service made up for some the food’s shortfall.

E: I agree. The night we went to this establishment made for a cool winter’s evening of hanging out with a good buddy.

But the next time we’re in the vicinity of the Clay Pigeon, I’m leaving my hound dog nose at home. Seriously, it must get retired. I should be chasing after birds instead.