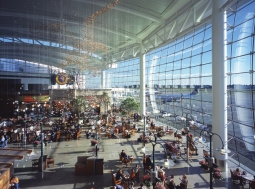 When people are having a layover at Sea-Tac Airport and can’t really stray far, the options in what to eat nearby does not have to be limited to what’s contained within the busy lounge. Airport food is expensive and you hardly get the quality expected. As recently expressed on Reddit in a photo that went viral, one traveler bought one heck of a joke of a sandwich. If only he was able to go elsewhere. If time allows for leaving the terminal, especially at Seatac, the hotels nearby have their own in-house restaurants and five blocks further is Taco Time, Jack in the Box and Denny’s. They’re no better, but if you have coupons and enough time to head there, a fast snack can be purchased that can put that sandwich to shame.

When I was in the area, the question that ran in in my mind was in whether I could dine as cheaply as possible. The dollar exchange was not with me on this recent trip, but I had to be in SeaTac for a Doctor Who convention! The hotel chosen for this show makes sense for the people flying in from Britain. They don’t have to deal with the busy highway to get to the venue. Two operations caught my eye as I staked out the area. Both are popular amongst locals and of the two, I’d come back again to one more than the other.

Sharps Roasthouse serves up good, inexpensive, hearty meals without making a dent in my wallet. I stayed within my food budget. When one of the first images to grace my sight was slabs of meat slowly roasting over an open fire as a display, I wondered what other flame licked goodness awaited. To watch this slow cooking process tease diners is certainly one way to work up an appetite!

The ribs I had were prepared St. Louis style. While that means lots of sauce and no pork snouts, I wasn’t expecting the latter, but it would’ve earned this place an extra star. Unless people have been to this city in the past or are from it, they would not know what makes this food unique for that region. The pork ribs I had was very filling and far more tastier with the parts where I had more fat remaining on the slab. The meat came off easily at each bite and the veggies (carrots mostly) were the first to disappear off my plate. The crispy onions were excellent and the french fries are certainly one of the best I’ve eaten in a while. When I can polish them off the plate without adding further condiments on top, that’s a really good sign.

I was here with newly made friends, and in what they ordered made me second-guess what I opted for. The Applewood Smoked BBQ Pull Meat Salad was tumbled at the table and that made for a great presentation. This was a tower of protein that had to be torn down and I was tempted to steel a girder from it since it had more veggies than my dish.

When I have to ask where’s the beef, I’d say it’s nearly everywhere in the menu and that’s good enough for me! And this establishment is cheaper than 13 Coins (which is about three blocks away). This other place is not for the budget conscious as a steak meal averages $40 U.S.D., foreign exchange notwithstanding! For a three course meal, $50 can easily be spent here and the cheapest dish is approximately $13 for a sandwich. I’m beginning to think that Reddit user is not far off the mark in saying it’s airport food. I don’t think these prices are worth it for the everyday man. The business class comes here to dine and everyone else heads elsewhere.

When I was here late at night to catch up with friends for midnight snack (dinner) I was torn between something on the cheap side or going all out. I kept on glancing over at the high flame licked grill and my culinary imagination went wild at what can be cooked up. That was my mistake, what was baked was not all that satisfying. The next time I have more money added to my food budget, I’ll give them another chance. I’m certainly not coming here for food that’s baked.

The Hangtown Fry is an omelette and pasta dish that was satisfying but not too appetizing. The oysters tasted off and the eggs were flat. I could taste the sautéed onions but the pancake like concoction was lazily put together. I might have had a better flavour explosion with one of their expensive sandwiches or reasonably priced breakfast options. If the pasta in this dish is meant to be cold, then they should have dressed it up with more than just parmesan. A sprinkle of some spice would’ve made this meal far more tastier. Nothing from this dish jumped out to excite me and maybe I had to spend more in order for a chef to make my meal right.

I think my friends ordered better tasting dishes and I seriously thought about the French onion soup that was offered. I saw how better prepared that dish was and could savour the goodness from across the table.

This place is more of a business class eatery where you get what you pay for. The only thing going for it is that it’s open late 24/7 to cater to night owls needing a meal during a layover after a long flight. When there’s not many operations running 24/7, the selection of diners will be limited. I’m better off going to Denny’s. At least I highly approve of their deserts. The hazelnut chocolate ice cream was locally made and not overdone with shavings that often kills the tasting experience. I slowly savoured each spoonful and nibbled at the graham cracker straws.

Afterwards, I returned to the hotel I was staying in and succumbed to the bliss of a memorable dessert. Next year, I’ll budget more to my needed fine dining expenses for a steak meal (I intend to return to Anglicon) but in the meantime, to the frequent flier who winds up in Seatac and can’t leave the vicinity, my money is on the RoastHouse. At least they have better bragging rights to cock a doodle doo to. I’d roost here any day because it was closer to where I stayed.

Sharps RoastHouse
4 Blokes out of 5