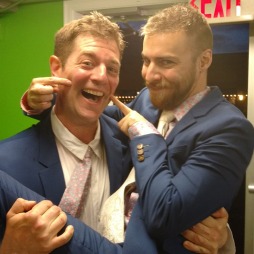 Each Adventure of Ape Man and the Fish Boy will no doubt be different and I certainly like to see them again. On May 3rd, they were billed as a duo of secret agents and on May 4th (the show I attended), they are performers going on a trip through time to undo a misfire as they took to the Intrepid Theatre Club stage to play … well, they did not even get that far in a funny way.

This act is still in development and in what I saw, I loved the camaraderie Rod Peter Jr. (Atomic Vaudeville) and Charlie Ross (One Man Star Wars) shared on stage. They’re buddies in real life and the concept they are shaping (mixing a hint of mime, pre-recorded cabaret-style music and geeky stand-up) feels like a blend of what I loved seeing from the days of the Carol Burnett Show when Harvey Korman and Tim Conway took to stage for their acts. In reality, they are working in the absurdist theatre medium, like in Monty Python. In the cinematic sense, I can see a style reminiscent of Rob Brydon and Steve Coogan’s show in Michael Winterbottom’s movie, The Trip. I could tell they’re fellow nerds (my Spidey sense kicked in) when they were riffing on recent pop culture products like Back to the Future, Batman, Doctor Who and Mad Max, to name a few. I look forward to keeping tabs on where this new comedic duo will go next. There’s a possibility of taking the show to Vancouver and Toronto according to Peter Jr. He also mentioned the thought of testing it out in the Fringe theatre circuit before going nationwide.

But as Ross mentioned after the show, the two will have to refine the product more before going prime-time.

The concept is great. I know Ross’ work very well from his One Man acts. His timing to elicit laughs is always on target. I’ve seen Peter Jr. dramatic works when he performed with Giggling Iguana’s Halloween shows and appeared in Tara Firm and the Lunar War Chronicles. Hopefully, unlike that show, the thought of furthering the world (in this case, their concept) won’t peter out. To see these two work together on stage, using their real names, gave a sense of realism to the product. Their stage names are Ape Man (Peter Jr.) and Fish Boy (Ross). Of course, most of that was dramatized. But I just could not help but guffaw at how the fourth wall is broken. It’s not done as expected (i.e. using the audience), but instead with a cameo from Victoria’s own Theodore R. Sherman. Normally, he’s involved behind the scenes in many of this city’s theatre productions. To see him as part of the act was a surprise to me, and I loved it!

I came into seeing this show blind. I was not sure what to expect. The name of this production was what sold me to check it out because it reminded me of those names used in circus acts. Some of the sideshow performances are very unexpected and if there was a plot, there were turns used which even I could not predict. These comedic talents made the die-hard nerd in me smile. The in-jokes they made for those movie geeks in the house had me grinning. Mind you, they’ll have competition as I’d like to date Charlize Theron too.

One thought on “Will There be Further Adventures of Ape Man and Fish Boy for Victoria, BC?”