Monsters Haunted House, the fine purveyors of spooky attractions for Saanich, BC, changed their operation from haunted barns to … one big warehouse for this year’s All Hallows Eve spooktacular. I miss the Evil Acres name. It had meaning for those who have lived in this municipality for most of their life; to witness the transition from farmland to modern housing is scary in itself. Some folks gave up the simpler life for modern conveniences. I watched my neighbourhood change from hothouses and farmland to nothing but homes for as far as the eye can see. To fondly recall those days brings nostalgia. Perhaps nestled in those large fields of grass is a corpse of a lost pet (or part of a human body) and the imagination can have some asking if a wild animal is on the loose.

The gorgeous back story crafted in this company’s previous show made going through an abandoned-looking home all the more chilling. All those murders and bloodbaths could have happened. Nobody could have guessed until local sheriffs and hospice arrived at the abode to investigate and offer relief.

This company’s latest attraction, Fear on the Pier, feels like a work in progress. There is no story to know of before going to this spectacle. Folks are entering a modern warehouse storing a decrepit warehouse which is sealed in black. Did a bunch of octopi expel ink here? Or could mighty Cthulhu have put his tendrils all over it, thus causing it to crumble into claustrophobic nothingness?

As I walked down the long concrete path to the warehouse, there is no suggestion the place might be haunted. There’s no signage. In a working dockyard where cruise ships arrive in, I was wondering if I could be a member of Scooby-Doo‘s gang? I’d get a kick out of boarding a haunted ship (an appropriately ominous large ship was docked the night I was there) and getting involved in a mystery. In this case, you go inside, get greeted to no tale whatsoever and get treated to mostly loud bangs and actors ready to scare you when you least expect it. 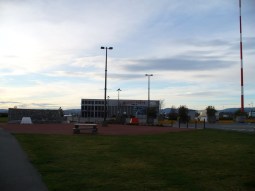 My buddy James was willing to join me in this excursion to get into the spirit of Halloween. I should have known he’d be a buzzkill. When he has better night vision than I do, he saw “things” a mile away and with his security guard instincts in high gear, I was warned of where the monsters (the actors) were hiding. The way he went about ruined the experience of me wanting to get a jump scare to appreciate. Had he kept quiet, I’d enjoy myself more.

Trying to navigate a truly dark environment was fun. When the set is built inside another building, yes, you can get protected from the elements (there was a wind warning in effect the night I went) but isn’t part of the joy of getting scared is to not be prepared for the unexpected? I joked with the few people behind us, as we left, the rush of cold air we felt after leaving the comfort of the warehouse might have been a ghost walking through us. We all laughed, and it was a good time, but I was not shivering.

Some of the beasts encountered within this attraction included a giant rat, creature from the black lagoon, killer clowns and ghouls spooking passerby by emerging out of window slits from the walls. Most of the scares come from the use of loud bangs and shrill whistles when you least expect it – very bad when you think about it from an otolaryngologist’s perspective – but there’s other ways to freak haunted house attendees out. Fear on the Pier is a carnival experience that does not have the glamour of smoke and mirrors to create some illusions.

With a name implying a mariner theme for this attraction, I was disappointed. I did not find the set designed to suggest getting entombed within a decaying ship. Sadly, I was told by a member of the team that the crew had to hurriedly construct their tomb. I’m guessing some of the details they wanted to be part of the attraction could not have been added in time for opening night. Halfway to Halloween, the fear being offered is gradual. I’m wondering if the scares might get better for those attending later in the night or come closer to Halloween? I was not expecting anything on the level of

I was not expecting anything on the level of Disney’s Pirates of the Caribbean, but I was hoping there would be a low-lying drifting fog and the smell of rotting sea life as James and I navigated the Darkness Maze. I was hoping for an assault on all of my five senses. Only two were really toyed with, and more could have been done visually to disorient folks.

If there was a ghost ship sailing by outside, nobody would have known.

I will return next year to see how this attraction evolves. It has the potential to be great with the right direction. I’ve studied literary and cinematic horror for part of my academic life, and I feel the creation of a back story to get everyone into the mood is essential. Instead of relying on shock scares, all this sea-side thrill ride needs are the sounds of fog horns in the distance (not close), whispers from dead sea captains, sweeping beams of light to disorient vision, mysterious voices echoing from random areas, and seaweed laden creatures dodging about in the shadows to get people on their guard. Where’s John Carpenter when you need him?