E: Sadly, the diner Skinnytato closed operations around late Summer of last year, and in its place, the diner went from Polish to Korean. Will I miss it? Not necessarily. Some mom and pop operations can only last as long as it is profitable or the owner/operators wish to keep their business going. Another possible reason is that the people behind Skinnytato decided to retire. I did not investigate to know for sure, but with what James is about to officially announce, all I can do is sigh. He is getting old too.

J: After seven years, I’ll be packing it up and moving on. Also, I am disheartened to see many of the restaurants we have reviewed close up shop. It didn’t matter if a restaurant was good or bad; sometimes Victoria is a tough place to run a place that serves food. We just don’t have the customer base a big city like Vancouver has. Victoria is a little more cut throat.

E: In other words, he’s burnt out (as a mutual friend pointed out). The many labours he has to do at his day job(s) and responsibilities to his family show his mind is elsewhere these days. He’s no Hercules. I’m finding he is not willing to put in the effort into any idea he has or we have come up for this site anymore. He was ambitious and industrious once, but it’s all gone. We were going to pen an article on a variety of novelty sodas we discovered at the Lilly Gobble Sweet Shop early Summer, but even that is constantly getting put off by him than me. I’m willing to bet he wants that article idea to fizzle.

I firmly believe he is making a big mistake by walking away from what we spent many years shaping as this blog’s identity. He does not care and shrugs off everything I suggest to him. Two Hungry Blokes is not ending. I plan on carrying on.

As for our meal, I must say our starting appetizer was a delight. The braised chicken wings were moist and had a wonderful succulence to it. Perhaps it had an orange marinade. At $9 for six pieces, it might seem like much, and I can easily have ordered another plate for myself. Instead, for my main course, I had squid over a hot plate and a bowl of rice.

J: Skinnytato is replaced by an eatery going by the name of Han. Not Han Solo the Star Wars smuggler or Hon, the former co-owner of Xeron comics but simply Han. In this place with the short name, they let the food do the talking for them. I ordered the Grilled Squid ($13.95) that comes marinated in Han’s speciality sauce and served on a hot plate. From this description from the menu, I’m going to assume Han is the name of the owner.

E: At least James is showing off his nerd cred when he can. Sadly, I doubt anyone remembers Hon of Xeron. They closed shop decades ago.

I’m certainly interested in coming back to try Han’s salads and other rice bowls. The description of what’s in the greens had me licking my lips.

Although their menu offerings are small, and we had two orders of squid, we certainly had our fill. The way the cephalopod was prepared with their special sauce and cooked was delectable.

Since James was slow at eating, I could not resist asking if he was going to be able to finish his plate.

J: As Ed was enjoying my misfortune, the short story is I was eating at another establishment when something rock hard in the food (which shouldn’t have been in there) broke two of my teeth. Until I get them fixed, the sharp metal filling exposed layers of skin off the side of my tongue. It hurts to eat and it hurts to drink. It interfered with the grilled squid. It was delicious. I loved the sauce and I loved how the tips of the squid’s tentacles were grilled to a crisp. I wish I could’ve enjoyed the meal more without the pain.

Han’s have a plum juice drink that one should try (if only it helped my wound). They say it comes with some Chinese herbal medicine (and the help of some rock sugar) that gives it a flavour of dark plum and nicotine. Shocking at first but very addicting after a few swigs.

E: There’s a joke I could make if James swilled prune juice, but sometimes he is not as ornery as I make him out to be. He offered me a spoonful of this drink to try. Yes, this nectar takes getting used to, although I would not be going out of my way to want more of anytime soon. I’d love to make comparisons to the brands sold at grocery stores, namely Fairway Market which has an extensive Asian section. 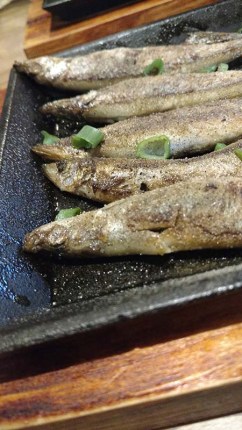 As an extra dish, I ordered their variation of a smelt, which keeps the eggs in the sac of the fish. The meaty and gushy texture was certainly unique. The tail tickled the roof of my mouth. It’s an acquired taste, something James can eat completely.

On my plate, I had troubles with getting my tongue around the crispy fish skin and a feathery tail. Now if they were breaded before frying, perhaps I would not notice as much.

J: Han’s dropped the ball when it came to being short on their salads on a Sunday evening visit, but made up for it in their service. I guess if there is just one person in the kitchen (I only saw one pair of feet) then that is to be expected. The place is small yet welcoming.

And it is cool is sit here and listen to Korean pop songs. At least they present the right atmosphere. Han’s is definitely worth a visit for those in the Downtown area looking for a quick lunch or a nice early evening dinner.