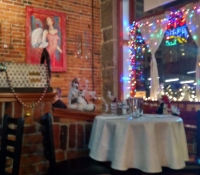 If you have not been to Marcela’s Creole Cookery in Seattle, Washington, please do yourself a favour and check them out before they close on December 22, 2017. I discovered this operation while wandering Pioneer Square on a Sunday night. I heard of this diner and was often a passenger in a vehicle whenever my friends and I passed by this area. As much as I would have liked to say let’s stop by here on those past visits, those pals are not obsessive foodies like me.

By the fortune in the need to refuel (I walked over from the nearby Chinatown-International District) and craving something other than American cuisine, this place not only hit the mark but was spot-on. Not many inspired diners offer enough or they are just not authentic enough to give me the tastes I so desire. I ate a little more than I should, and that’s okay.

Instead of going by order of what I ate first, I have to give their crawfish roll high marks for putting the classic Asian spring rolls to shame. I’ve have many varieties over the years and while a few have a pleasant combination of vegetarian flavours, this mountain lobster really adds a taste to make the crumble wonderful. More meat could have made this single serving perfect; instead it was found in the center like a tootsie roll. Instead of plum sauce, perhaps what I had is a pineapple cayenne mix. Other ingredients included the holy trinity in cooking this style of food with carrot added on top.

Other dishes I had include an appetizer sized plate of fried alligator and a dish simply called a Cajun trio — jambalaya, fried catfish and a bowl of crawfish étouffée. The first dish was so wonderfully unique. The meat is often characterized as tasting somewhat like chicken, but I do not think so. I found a sweet pork-like taste; the reasoning is most likely because the muscle came from the tail section. When breaded and served up with two dipping sauces (a tartar and hot sauce), I tried both on its own and together to see which I liked more. My money is on the tartar.

From the second dish, I have to say the étouffée stood out the most; it warmed this old soul. I could have ordered a second because of how the scents tickled my nose. Both this dish and the jambalaya had a wholesomeness to it which I loved. The latter rice dish was soft and fluffy; patrons who walked by me commented on how good it looked before settling by a table next to me. The fish tasted sweet. None of the fried dishes were greasy and were well-baked than dipped in a fryer.

For dessert, I had a bread pudding with whiskey sauce. I was flying high and did not want to go land. This hot dish was still bubbling when it was served and the scents had me on a high I refused to come down from. The woodsy smell coming from the caramaization of the alcohol when poured over the cake (to which I tasted nutmeg, cinnamon and raisins) made me slow down to a pace of a turtle so I can enjoy every bite.

The fact this operation is closing down has me sad. Instead of being negative, I can at least think about the future and where to find them next. I believe Anthony was my server and he made sure everyone was well attended to, even on a quiet Sunday night. Business picked up a little after dinnertime, so he was ready to take on any sized gathering. I didn’t order alcohol and he made sure to keep my glass of water filled. This level of service was great, and the decor had me feeling ready to celebrate the holiday Louisana style.

Regulars to this establishment have plaques by certain tables and they have till the last day to pick this up as a memento of a place that will soon be gone. Had I have known, I should have asked if I could have one of the masks hanging on the wall. I’m sure they would not allow it, but I need a momento! This operation has an authentic mom and pop style charm which I like. I’ll be sad as this place will not be around when I return in March for Emerald City Comic Con. I’d be willing to make the trek from the convention center for here for another bite. According to their Facebook post, Anthony plans on starting up a new restaurant when he returns home to Louisiana. I’m going to have to keep tabs as to where this business will be and journey there to get a taste of the authentic from more than one establishment for comparison’s sake. Back in Victoria, getting crawfish is next to impossible. I hear Canada Customs have tightened up their restrictions and if that’s the reason, I’ll have to cross the border to get my ragin’ cajun on.

Despite not having a drink, I felt very filled and did the Voodoo walk afterwards. I was glad the transportation, the light rail line, back to my hotel was nearby. I might not have made it home.