After seeing the movie Ramen Teh during the 2019 Victoria Film Festival, I left the theatre with a craving for bak kut teh (Meat Bone Tea). This film suggests the broth in this dish and ramen are similar, though, with the former, more herbs are used. It soothes the soul, and as this film suggests perhaps also help mend fences.

With this movie, it not only offers a lesson in the origins of this noodle dish but also explores the foodie scene in Singapore. The story looks at how Masato (Takumi Saito) seeks to reconnect with a part of the family he’s almost forgotten. When his Japanese father Kazuo (Tsuyoshi Ihara) passes away, he cannot quite continue to run the family ramen shop soon. There are bitter memories, mostly in how distant otōsan has become over the years. No reason is given right away, but it’s quickly revealed he’s never recovered from the loss of his beautiful wife, Mei Lian (Beatrice Chien). Since that departure, he’s become emotionally distant and a complete workaholic.

As Kazuo visits his past, recollections of his youth with mom come to the fore. This includes her skills as a chef and recipes passed down from one generation to another. But even okaa-san is not without problems either. Her parent did not approve of the union between Singaporean and Japanese because of a previous time. Some still remember the atrocities and it’s difficult to forgive. This plot slowly gets revealed like the unfurling of a flower, and the sense of where this story goes is predictable but sweet.

Uncle Wee (Mark Lee) is the mediator, and he’s no stranger to the kitchen. He runs a bak kut teh (pork rib soup) diner, and Masato thankfully can learn from someone. The tones this movie makes shifts evenly between family drama and a food lover’s dream. If smell-o-vision exists, I doubt I can last without feeling some hunger bangs while watching this film. Foodies can delight in the fact of learning a few things about what makes food from this region a delight. Part of it also includes understanding the region and its wild weather patterns to cultivate the best veggies and taking that into account when cooking otherwise that pork may not look as good as it does.

The flashbacks define this film even more. To see how Kazuo and Mei Lian met and fell in love is gentle and sweet. Chien does a better job of playing the role of an endearing mom than a young lady in love. The soundtrack varies, at times melancholy and other times cheerful. Joe Hisaishi’s musical style is prevalent in this film and he is better known in anime circles as a frequent collaborator with Hayao Miyazaki. 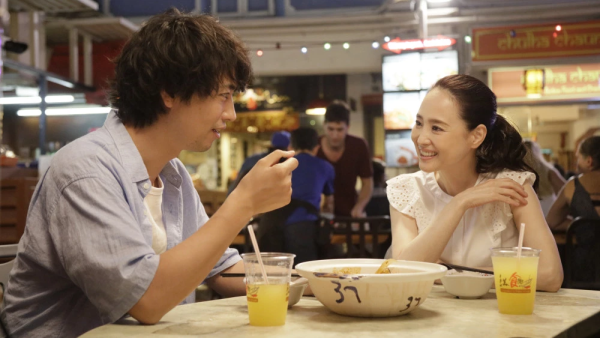 During the movie, Masato meets Miki (Seiko Matsuda), a Japanese food-blogger, and together, they make for a far more engaging and perhaps soon-to-be couple. It’s too early to tell if they are, but it clear Miki cares for this lad who is a stranger to tradition. He learns and comes out a stronger man. Perhaps what’s better is that he finds he’s not alone anymore. To have one side of the family to be there for him is never enough.