ES: Tucked in the industrial side of Victoria, BC (in the municipality of Esquimalt) is Miche Cafe. It’s been under various ownerships in the past and I’ve lost count! I’m rarely in this side of town mostly because I’m not a supporter of the nearby operation, Wholesale Club, (family loves shopping here for the bulk goods but I don’t) but when I have to chauffeur, it’s playing Pokemon GO in the area, or coming to this corner deli style stop for a bite because of the atmosphere and down home cooking!

DK: Don’t think we forgot about the bread price-fixing scam. Am I right, Ed?

ES: Don’t get me started! 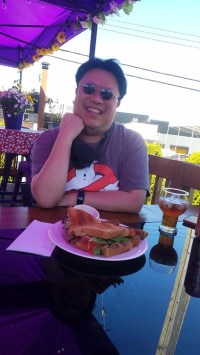 DK: Meanwhile, at Miche’s, prices are the opposite of artificially inflated to mess with customers. A bacon cheeseburger with onion rings ended up costing me $11, which is $2 less than what is advertised on their menu. It’s either a coviracle, or sides are regularly charged at $2 when combined with a burger.

Point is, this place is cheap. Closest comparisons (price wise) for a homemade burger are Willow’s Galley and L’Authentique Poutine. More on these options later. But first, I gotta agree with Ed. Fantastic atmosphere here. Friendly patrons, humans and birds, abound.

ES: I was happily chirping and pecking at the tasty yam fries. They were the true highlight of my lunch.

I must say I’m sold when I’m told the roast beef was made the morning we went. It was juicy, red and just the way I like it! (medium rare). It made for a delicious sandwich without the price gouging that Don noted.

Exploration is a must though to find these corner operations that truly do cater for the locals and it’s certainly worth the trip for down home fixins.

DK: Yes, thankfully the E-Boys have stopped braining old ladies and Esquimalt is shedding the violent reputation it had in the late 90s/early aughts. Returning to the subject of similarly priced burgers in neighbouring municipalities; Miche falls in the middle for me. Better than L’Authentique, trailing behind Willow’s Galley. The positives here are a generous helping of bacon and decent burger sauce.

The main negative: a large, somewhat dry tasting bun. The onion rings were good and greasy–similar to what you would find in many other local restaurants, but perhaps served in a slightly larger portion than Miche’s competitors.

One thought on “Finding a Niche at Miche Cafe”