Editor’s Note: This business is no longer at the address listed below.

I went up island not too long ago and instead of my buddy James, it was some other good buds. We went to Ladysmith and on our way back, I suggested Chemainus as a stop. We hit upon their Wednesday Market at the downtown core and found a stall selling Japanese food from Kudos Restaurant.

The prices we paid for here are for samplers, but at these prices its easy to build a meal.

And here, both Brydon and I agree that the kaki fry (deep fried breaded oysters) were spectacular. At $2 a pop which includes a small salad, I could’ve easily bought them out. 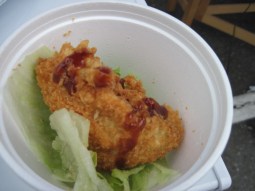 The panko breading was home made and it helped give these juicy Fanny Bay oysters an awesome texture — especially with Japanese mayo on top.

I also tried the Korokke ($2; breaded potato with beef and onion) and that was satisfyingly chewy. It was half the thickness of a hockey puck, so I had quite the fill.

While all their deep fried stuff was sitting in a hot plate, it’s not as good as hot off the frying pan. When considering how busy the market was, the food didn’t last long. I overheard the staff calling to replenish supplies from their business up the road, and that’s good because it meant the food wasn’t sitting there for a long time. Well, maybe their sushi was.

It’s in par to what Fujiya’s offers at the end of the day and I found their California roll a touch on the pale side. It wasn’t as flavourful.

And after looking at Kudo’s normal take-out menu, the food they offer are pricier. This establishment is located in a smaller town and is catering to a tourist market. But in a larger city, I can find the basic rolls (makis) for less, even at a quality restaurant. But at the market, everything was sampler-sized priced. The five pieces of sushi were marked at $2.75. But for what I spent, which was less than $10, I had a meal.

I was definitely reminded of what eating from a street food vendor was like. Ah yes, I remember my days of wandering Shinjuku, Tokyo late at night fondly, buzz-saw snores n’ all.

Two stalls down, there was also fresh fudge to be found. One doesn’t have to travel far to get some of this wonderful sweetness from Beaver House Fudge. They’re well known on the Island and they do mail order. This company is actually based out of Duncan and seeing them at this market is no surprise.

This company uses organic cream and butter, and I can say the choice of quality ingredients shows. There’s a full bodied richness to their fudge, and I really have to try other flavours before giving a verdict.

At least for what I bought, their almond hazelnut, I love the soft flavour and the texture. But there wasn’t enough nuts to keep me satisfied. I’d rather appreciate more than less, and I’m still thinking of those oysters, dagnabit!