Note: This establishment is no longer at this location. 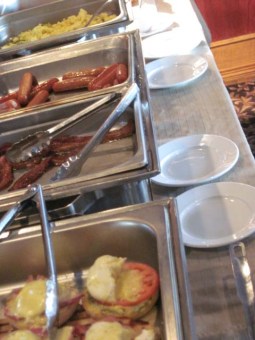 E: Every starving student knows that depending on where the campus is located, there’s very few or a lot of dining options to be found nearby. Well, over at Camosun’s Interurban, it’s either the Knockanback or that Chinese diner across the street.

After looking at their online menu, I had to drag James along to try this place out.

For the most part, it was good, but nothing spectacular to brag home about. Well, unless you’re a beer drinker. The almost European atmosphere had a Jamaican vibe going on the day we visited. I grooved to the music.

J: I remember the Knockanback from 15 years ago and couldn’t help but think it was nothing more than a redneck dive. After walking through those wooden doors, I can still see a few corners where a vampire could settle for pint. The waitresses were cute and the staff were helpful. But it’s not the type of place I’d frequent. If I’m looking to become a regular for a buffet meal, I’ll stick with Raymond’s. Or I’ll have a proper breakfast at Smitty’s.

E: This place easily outclasses Raymond’s based on my experience. I’ve been there with family several times in the past and never cared much for all the grease spread out buffet style. At least here, the buffet comes pre-packaged to go. I saw ketchup by the cup. I guess they don’t like the idea of sharing dispenser bottles?

Although the scrambled eggs, hash browns and french toast weren’t anything to brag about, I did find the pork sausages and bacon decent enough to satisfy the greaser in me.

J: The bacon was average. As with some religions, I’ve converted. The taste of turkey stands above salty pork bacon on any day. It’s hard for me not to taste some grease in pork, but with this helping, the grease lingered. The scrambled eggs, although a bit moist, grew on me. I easily shoved fork loads into that compactor I call a mouth. At least the hash browns had a sprinkling of herbs. It slightly enhanced the flavour. The pork sausages were cooked thoroughly without a sign of any burn mark or browning. Maybe the cook was that good or perhaps he tossed the rejects. Feel like dumpster diving Ed?

E: Late at night, behind some grocery store or at the back of a restaurant? So can we dress up like Randolph and Mortimer? Are we now trading places from fine dining to digging for dollars now?

J: Just think of the new direction we could take. We know what their food served inside is like but how is their food outside? It’s the kind of budget we would see if we were with University Canada West.

E: But seriously, the food at the Knockanback is good once when you get past the breakfast menu. I think they never expected something resembling the college crowd arriving on a quiet Sunday afternoon, especially with the International Naval Fleet Review happening downtown.

J: Granted, the pesto made for a tasty eggs blackstone. The french toast was fair, but I loved the cream made from scratch and the syrupy pie fill strawberries from a can. Topped on the toast, it became my idea of breakfast.

E: It was lunch which made this place good. I actually enjoyed the veggie stir fry since it had a lot of flavour to it. The chicken curry is passable, but wasn’t spicy like I’d hoped. But what sold me to this place was the chicken corn chowder. It was made just right, even though at first glance, I thought I was staring down at a congealed mass of goop. It just had to be regularly stirred like a witches cauldron, that’s all.

J: Desert wasn’t so bad. The fruits that were on the table probably sat for far too long and the same can be said for the fudge brownies. I tried two and my favourite was the brownie with mini-marshmallows on a thick fudge topping.

But what in god’s name possessed them to bake chocolate chip in the other one? It’s fudge, you don’t need any more sugar in it. It was too rich for me.

I have to give thanks to the staff all the same for the quick response to a chipped glass my orange juice was in. They gave me another glass, but I was disappointed because the juice wasn’t served chilled.

E: And James loses it in a diabetic coma. Give me Death by Chocolate and I’ll be there. I’d say this place is a good place to visit if one lives nearby, but the next time I’m in he area, I’ll check it out again to see how their dinner menu fares.