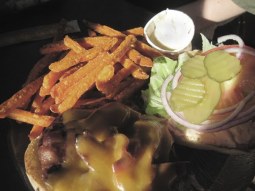 I am what I am, and I’m hungry for yams. QV’s yam fries are the epitome of deliciousness, and in the times I’ve popped in here, the quality of these fries have always been consistently excellent. The aioli dip just makes them taste divine.

I’ve never had a bad yam during the times I’ve visited this diner.

In my career as a french fry enthusiast, I’ve sampled a lot. I’ve hit a lot of places looking for the ultimate fry, and so far, have to rate Barb & Ed’s as number one, QV’s yams’ number two and I’ve yet to find a number three. When that happens, I’ll let you know.

But there’s more to QV’s than just their fries. They serve up some premade packaged food for diners on the go, but when one can sit down for a spell I was charmed by their bacon and cheese hamburger. The thick layer of melted cheddar on top of the bacon made for a nice chewy beef patty. It wasn’t too moist, and the fluffy bun helped soak up anything that would’ve dripped as I ate. The crispness of the bacon was great, and when compared to what I had at the Jackalope, this place doesn’t skimp on the bacon. I could’ve ordered another without a problem, and maybe even a third—all while waiting for that heart attack to happen.

The staples of what defines a burger—the lettuce, onions and tomatoes—where satisfyingly fresh and nicely cut. I appreciated the veggies and the meats were kept separated when it was brought out to me. I could nibble away at the pickles first, before chowing down on the rest.

While I’m not sure if QV’s gets their greens from down the street (one can buy reasonably good greens for cheap in Chinatown) what I tasted was indeed fresh. The flavours of the tomato was pronounced and the red onions satisfyingly sweet.

I polished my meal off with a thick strawberry milkshake. And with a hot bright sun beating on me that day, it certainly hit the spot in all the right places. The next time I’m here, I’m going for the coca cola milkshake; they actually have the syrup and I can only imagine good things about it. It’ll cool me off to the bone, and the only chills I’d get that day would be from the spooks that are said to haunt the Maritime Museum. Ghost Hunting 101, here I come.