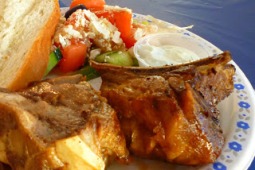 J: When Ed asked me if I would the return to the annual Greek Fest, my exuberance knew no bounds. To me the Greeks are a wonderful and beautiful people who I find have many similarities to the Portuguese and Italians. Many of them have a passion for food, love and their religion. The last of which I most admire.

I was hoping to find 2 out of 3 on the recent Blokes outing (I was already spoken for). My natural curiousity to view the grandeur that is the Greek Orthodox Church had not waned in the two years since my failed attempt.

On my stroll to the occasion I took a moment to observe the Churches of both peoples, the Greeks and the Portuguese, as they stood proudly against a Saanich summer sky. They reminded me more of two embassies than churches, steadfast and a better representation for their people than any diplomat could offer.

E: It sounds like James and I will have to hit up a Portuguese celebration next time. The last time I heard of one in town was in 2010, but alas, I have not heard about it continuing. I may be wrong, but that will be something we’ll have to look in on. A change of flavours and culture is much needed. Or maybe, a need to travel to the country in question is required to get a true taste of the old world.

That is especially true after hearing what James had found in his meal. That is, I would have heard him if the music was not so darned loud. I understand people are here to listen to the music and enjoy the show, but when people can’t even hear each other from across the table, that is an issue. 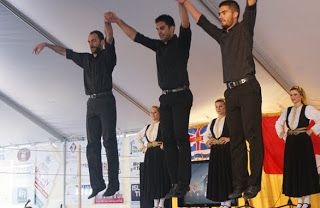 I had very little to complain about with my meal which consisted of a huge plate of lamb. Cooked over a fire is one thing, but maybe they should start smoking it with olive branches or add a dressing on it just to add a bit more to the flavour.

Also, James and I were both told that there were a few Bougatsas left, and they would be available. One was reserved for James and that was enough to get me wanting to try one. Sadly, by the time we tried to pick up, were were told they were sold out. That annoyed me and I wanted my money back instead of going for a substitute.

J: Ed got his money back but I huffed and puffed in front of one of the kitchen staff before I relented. When my money goes to a good cause, I’m more open to suggestions. And on their suggestion, I took the Greek doughnuts I had tasted two years earlier. They were still as delicious as I remember.

But for the squiggly dark hair in my dinner, I went quiet. I never complained of my disgust. It wouldn’t have hurt if there were hair nets worn by all of the kitchen staff.

At least my faith, in knowing that I would one day see the interior of the Greek Orthodox Church, had finally triumphed. Inside was simple yet ornately designed. Rows of intricately carved pews were surrounded by classical inspired paintings of kings and saints. And from above overlooking any service are painted the 12 disciples of Christ. All of these achievements were the result of nuns from outside the great city of Athens.

It was all very powerful and one could easily be alone with their thoughts in this holy place.

E: Maybe the third time is not the charm when the time comes to sampling various culinary delights at Greek Fest. The organizers should know better after ten years in not to under-estimate the demand for certain types of desserts. the Loukomadies tasted bland against the Greek coffee that I had. The custards should not have sold out before high noon. When there’s a Portuguese church across the street, that’s enough to make me change faiths