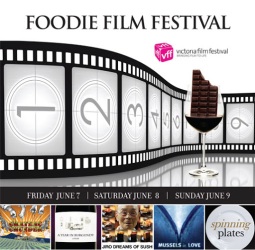 E: I like to think that I helped the Victoria Film Festival go in the direction of having more food related events after my little post about their lunch-time shorts, but they most likely had the idea brewing for some time.

I missed going to see Jiro Dreams of Sushi in February and to make this film the one to kickoff this foodie event at the Oak Bay Beach Hotel was a good idea. I enjoyed the stroll to get to this swanky part of Victoria. Just down the hill is the Victoria Golf Course. James labored up a hill to get here.

J: Due to a miscalculation by Ed, we ended up taking a 20 minute walk to reach the hotel. The journey was scenic but the heat was a bit too much for this boy. But the blood sweat and tears was all worth it when I saw the grandness of the playground for the well-to-do that greeted me. 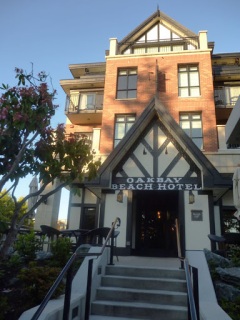 Like the Fairmont Empress, Oak Bay Beach has their own bellhops. I’m guessing it would cost half my paycheck just to stay here for a single night without food or drink. If only I were rich like the Brendan Fraser before his pre-alimony.

E: Actually, It was James’ idea to take the 2A, the other Oak Bay bus that diverged north than south. It seems his memory loss and age is also catching up to him.

Fortunately, as far as this movie is concerned, Jiro is sharper than ever as he’s been making nigiri style sushi for over 70 years. He’s developed a way of bringing out the flavours of each sakana (fish) that enters his restaurant, and he only chooses the best. These days, its his eldest son, Yoshikazu, that does the hunt for the best fish in Tsukiji Market. He’s took over this role about ten years ago.

Even the way the nori (seaweed) is fanned over an open air flame oven gives a hint of how even the most basic of ingredients needs to be done right. Yes, I was making notes.

J: With reservations needed to be made, anywhere from a month to a year in advance, I’m sure I’ll never get to eat at Sukiyabashi Jiro even if I made the trip to Japan. But in the meantime I was more occupied with the food being offered prior to the film screening. Different types of sushi were accompanied by shrimp cocktails. And to aid our sushi tasting, I drank locally produced sake by Artisan Sake Maker, located at Granville Island. 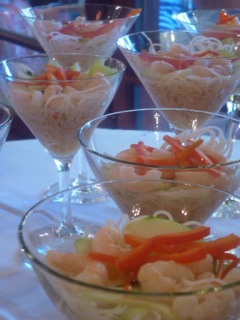 E: Those were sunomono salads, James. I thought the rice vinegar could have been sweetened up and watered down a notch, but that was the dish to go for. But the true highlight of this catered event was the sake. It had a nice fresh fruity finish that tantalized me by the nib of my tongue.

Yes, I was making notes here too. Sadly, the maki sushi was nothing to rave about. It didn’t have that special aroma that I associate with properly made rolls. The sweet scents of the rice vinegar should intoxicate the gently warm rice, and tickle the nose. Here, I could have gotten plastered by the sake and this drink did complement the rolls well.

And I was pleased that a mix of vegetarian and raw fish rolls were offered. And the cooks behind the table were showing how rolls were made. They didn’t look like they were there to answer questions about the finer points of sushi dining to curious connoisseurs. That would’ve helped make the introduction to this foodie film fest spectacular.

I was taken aback at witnessing a few people drenching the pieces with soy sauce.

J: I’m fortunate Ed didn’t observe what I did to my dishes.

E: Attentive viewers of the movie can learn how sashimi and nigiri pieces should be properly treated before consumption. In the film, the staff of Sukiyabashi Jiro restaurant was demonstrating proper techniques in how much soy sauce should be used to enjoy a piece of nigiri sushi. A light hint of soy sauce is brushed on the fish before its presented. Watching this film made me hungry again.

I could go to Japan and take up residence in Tokyo to enjoy all the types of cuisine offered here. Its fast life might be tough at first, but I’m sure I can fit right in.

J: I was dressed as the appropriate man for this event, but there were tell tale signs that I didn’t perhaps belong in a hotel this nice. Perhaps it was my inexpensive Cote d’ Azur watch or maybe it was my insecurity. Whichever it was I was trying to do all I could to enjoy myself. The sushi was bad, dried rice and all. The hotel contracted a sushi maker who managed to produce food that was sub par. Ironic that; we were there to watch a film about a sushi chef whose food was talked about internationally.

E: When Jiro Ono is awarded three Michelin stars, its tough to compare anything you ate prior to sitting down to what you can salivate over on the big screen. I think the other films fared better since they featured local food than international.

And I really enjoyed this film. It dealt with how driven a man is and his commitment to food excellence. He sacrificed a lot in his quest to perfect the art of sushi-making. This film could have easily been 5 stars, but it drops a notch because it doesn’t delve further into Jiro’s home life or family life. In the brief moments where it did, the narrative felt more like side-bars than intregal to the plot. I had to wonder when did he find the time to get married, have two children and run a restaurant? More exploration about the relationships he has with his family and staff could have helped really define the man.

J: And the film was salvaged that night thanks to the technical expertise of Mr. Ed Sum. After one or two false starts, Ed with his helpful (or nosey?) manner stepped in to advise. In no time at all the movie began much to everyone’s delight.

E:When you go through as many video players as I have, you do learn the nuances of how to skip those trailers at the start of the disc. It’s not as easy as eating pie. And to create a perfect maki roll, well, don’t get me started …. The next time I go to a foodie movie event, I’d rather pay more to see the food made right.

Jiro Dreams of Sushi Rating:
4 Blokes out of 5