E: On a bright hot day, Victoria’s First Street Food Festival started off with a bang. That’s what I hoped happened and that’s what I heard when a hungry lunch crowd roared out of the office and towards Centennial Square (now known as Spirit). I’m sure there were lineups everywhere, and the wait was at least 15 minutes for a hot dog, burger, pizza, poutine or waffle.

When photographer Yvonne Fried, James and I showed up ’round 3pm, I thought things were quiet. Maybe, too quiet? I had to wonder what the hungry crowds of pac-men (and women) were like during rush hour.

Well, I’ll be back this coming Friday before noon (or in the late morning) to experience the real deal.

J: There was a fair crowd when we arrived but not what I was expecting. I’m going to guess we were late because a number of food trucks were absent (Dead Beetz) while two more closed down (L’authentique Poutine & Burger and Puerto Vallarta Amigos). It took a few minutes to decide who to sample first. And I find it’s usually first impressions that set the mood for the rest of the festival. Ed like someone reanimated from the dead made his way to Dog Nation. But instead of brains he was craving the 100% beef dogs from Glenwood Meats.

E: Yeah, I wasn’t too interested in visiting food vendors I’ve been to before, so I was scoping places I haven’t tried. Out of what remained that day, the choices were limited to five carts/trucks. I was in the mood for a dog, and the product was not too bad. The Persian was underwhelming though. I expected a toasted bun than something out of the package, sitting on top of cold packs. My feelings about the baba ghanoush were very lukewarm even though I saw other hot dogs look far more delectable. I was curious about the searing going on with what looked like British bangers being done up with a propane/butane torch. I wondered if that’s a health code violation.

J: I even wonder if not wearing a hairnet is a health code violation. If kitchens in restaurants have to wear them, why not the people cooking at carts/food trucks? I agree with Ed about the bun but their problems run deeper. It’s not only that their Indian dog was unimpressive, I thought the overdose of onions, wet bun and lack of taste made it a bland dog. 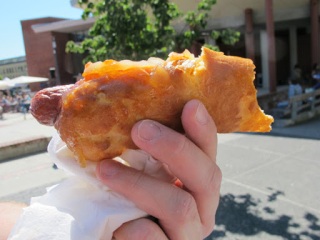 Even their service was poor. I ordered my dog right after Ed and yet my order arrived at least five people after he was served. It would’ve been more or in fact it would’ve never arrived if I didn’t speak up.

But the cherries on top was how one of their staff shoved through our photographer Yvonne without saying “Excuse me.”

Did I mention there was a hair in the paper napkin I used to wrap my hotdog? I don’t think it came from any of their staff but it wasn’t mine either. I tossed 3/4 of my dog away and vowed never to return to their cart.

E:  I’d rather return to Victoria Oven since they were more friendly when James and I discovered them last year. I just have to figure out where they moved to.

At least the second place I hit was far better by a mile. The thought of bison in all its Albertan glory was enough to salivate my taste buds. I’m sorry but Vancouver Island Bison just sounds wrong. The range where these creatures roam has to stretch from Montana to Wyoming so those muscles get a good workout. The tall grass they graze upon should also be tasted too. To limit their migration patterns can affect the quality of the meat.

That said, I was very amazed at the fact that Big Dogs Burger Bus came all the way from Vancouver to the island to show off their wares. I haven’t had this quality of meat since my days of frequenting Connoisseur Catering’s diner a long time ago. They still operate by catering at event functions. They had to close down the diner since it wasn’t up to spec. Although the patties that Burger Bus uses were thinner than what Catering offered, I was still suitably impressed. They used red lettuce, sautéed onions and good ol’ processed cheese as the base product, and I decorated my burger with some grainy mustard and a few peppers. The combination was delicious.

I was immersed in my world while I looked around for James… um, Bueller… Bueller? Where did he go?

J: While Ed was lining up for water buffalo (or was that bison?) I decided to try a little Kulture … yogurt that is.

Kulture Frozen Yogurt is a local brand and they have a wide range of frozen yogurts and sorbets. They even have a lactose free yogurt for the canine friend (I had to wonder how can one tell if the dog gets a brain freeze?). On the plus side, one of the two young men liked my Liverpool FC hat, but that compliment wasn’t going to sway my review. 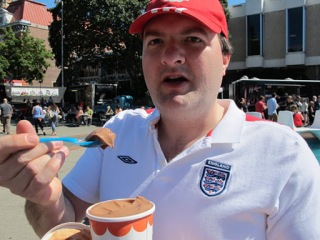 A pint of the frozen yogurt costs $5.99 at Pepper’s Foods but for this event, a straight fiver was all that I had to fork over. The cart vendors threw some flavour suggestions my way before I decided to rely on good ol’ milk chocolate. I have to admit it tasted more like fudge than milk and it didn’t stop me from emptying the container. It was quite smooth and somewhat tasty. With Ed still in line-up there was no need to share.

E:  And what a friend he was. Yes, I’m being sarcastic. Here I am sweating under the hot summer sun….

It made me wonder how some hairy beasts survive the mid-west. At least I can say my bison can trample that yogurt any day, but I did wonder where that ice cream vendor went? The ads for this festival said that SnoMoose Ice Cream would be here, and if they were, they must have run out early. If they are scheduled for this coming Friday, I’ll be here.

I was not a happy Ed since the day was getting warmer. Fortunately that was curtailed by a cool crisp cider that an old acquaintance of James treated us to at the beer garden.

J: Rishi Savera, a web designer and a up-and-coming clothing designer didn’t recognize me at first until he shook the cobwebs off. And when you’re this dry and covered in cobwebs you go for a cider sponsored by Rishi. Yvonne wasn’t having none of it but Ed gladly accepted a cup from Merridale Estate Cidery. 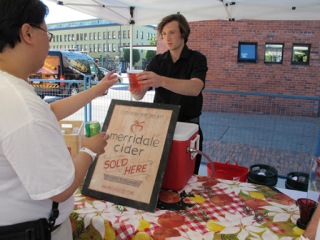 Ed is what I would call a Scotsman’s drinking buddy, you can get him drunk without spending a lot of money. That could be one of the reasons he’s my friend (it’s cheaper that way).

Rishi and I spoke of family, of his days in Milan, London and New York. And me, I wanted to talk to him of my days in Los Angeles, Vancouver and Nanaimo but I didn’t want to make him think I was trying to outdo his stories.

E: I was surprised James could get a word in edge-wise with the two slices of pizza that he neglected to share with me again.

Although I did eye a Sidney based Baron Burgers operation that offered a hot dog with bacon, I did ponder meticulously, to eat more or not to eat… The lady behind the till was more interested in continuing to talk to another person (perhaps a friend) than to ask if I was ready to order. I can understand if the till operator is putting away receipts, but to chat away without checking was odd. Snubbed, I simply walked away to leave the taste of bison lingering in my mouth instead.

J: I did eat a couple of average tasting pineapple slices at Bonterra Pizza but maybe it’s because it sat for some time under a warmer (it sure tasted like it did). There was some sparks of what it tasted like fresh but that wasn’t enough to satisfy me. Bonterra really had no line-up most likely due to their ass end location in the corner of Centennial Square under a tree. I hope they didn’t pay premium for that spot. They’re a family run restaurant in Shawnigan Lake and when next I visit the area I’m definitely going to dine in and enjoy what they have to offer.

E: The Victoria Street Food Festival continues this Friday, July 26th from 11am to 8pm, and let’s hope the staff get it right the second time around, food storage notwithstanding.