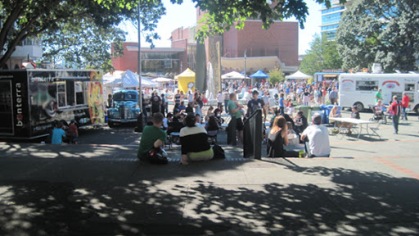 I’m glad that the Victoria Street Food Festival managed to shake off the cobwebs on the second day of celebration. Even though that happened a week later, from its inaugural July 19th start, the vibe I felt while here at 3pm was far different than the one James and I experienced a week ago. He couldn’t make it this time ’round due to work, but I had to come back for a second day and give this event a chance.

I missed the lunch time crowd by a mile, but that’s because when I woke up, did I really want to bus down and wait another 10-20 mins to get some grub in me?

No. I wanted to come downtown when things were not as busy. And when hot dogs, hamburger and french fries (poutine) tends to dominate the scene, I’d rather start the day with something healthy. I was glad to find that in Victoria, options do exist. Last Friday did not demonstrate that. This Friday, did!

At Deadbeetz, there was plenty of vegetarian type options to feast my eyes upon. I hemmed and hawed at three options that caught my eye: the cashew chickpea bun ($9), a full order of beet and yams ($5), and the BBQ Beef brisket ($9) with sported some hearty organic greens.

Fortunately, it did not take long for me to decide what I wanted.

The carnivore in me was gnawing for some meat and I went for the obvious choice. I was not disappointed at all. The greens had a wonderful taste of coming fresh from a well cared garden and I would not be surprised if all of the vegies were grown by the owner of this operation herself. The brisket was very tender and it tasted great against the warmed hogie it was laying upon. The sauce helped bring all the tastes together.

The next time I decide to visit this truck, which is located behind the Save-on-Foods Memorial Centre, I’ll certainly be back to try the beet and yam chips. I think it’s very difficult to mess up on yams, but beets?

I wondered what could I eat that James would not touch with a ten foot pole? I’m braver in that context, but alas there were no tacos filled with crickets or mealworms to be found. I’ll have to head to Mexico and peruse their markets for that. At least there was a cousin to be found with Tacofino. They offered soft tacos made with ling cod. I may be incorrect, but I think they started in Vancouver first and branched out to Victoria. To keep track of where they can be found next, it’s best to keep tabs through their Facebook page.

According to this operation’s main website, they do offer seasonal delights, so I’ll certainly be present when wild mushrooms and spot prawn are offered. They may well be the next best thing to eating bugs, but I digress. Fish on taco has been a long-time staple, and here, they certainly know how to present it right.

I only had one fish taco, and I could have easily had more. At $5 per, I had to be careful in how much I spent. I was on a budget today. If they offered three for $12, I would have been sold and bought more. I’ve had ling cod before, and the way I ate it Chinese-style (broiled and sauteed in soy sauce and peanut oil) does not compare to when its battered up and crisped. Had there been more volume to this fish strip, the taco could have tasted meatier and maybe a bit more enjoyable. But even without, the balance of all the ingredients it was very good. Every piece complimented each other very well, and I loved the softness found in the shell.

But to detoxify, there was a operation that I had not heard of until now. Wilde Greens and Grains offered plenty of unusual and interesting elixers to drink. The WIld Horchata is a latin drink made from ground almonds, cinnamon, nutmeg and honey. I should have checked to see what they use as a base. Depending on the regional variant, it can be filtered water or milk. I should have checked, but I was drawn to the wildebeast ($8). This thick milkshake like drink may not look like much, but I certainly thought my liver got the kickstart it needed after sipping this drink. It is made from flax, hemp, pear, apple, chia, cinnamon, nutmeg and almond milk.

I must say I’m very happy with the variety of trucks that remained till 4pm. While a few operations were suspiciously missing, I had to wonder if they even showed up at all. SnoMoose may have come and gone. I’ll just have to find them elsewhere.

All in all, this Friday experience was far better. There was a better ambience that I could feel throughout. The number of people exceeded what I thought showed up last Friday. And if there was a best in show, I think L’authentique Poutine & Burger would have taken home the trophy. On both days, there were consistent lineups for their food. I glanced at their menu and there was nothing new that grabbed me as a must line up for. After seeing all the crazy poutine inventions on their Facebook page that they offer on a daily basis, today was just a return to basics and that was not what I was after.

Now if there’s only some place that offered grasshoppers in food… or a real street cart based ramen service, I’ll be very surprised.