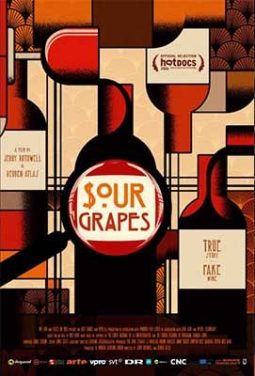 Not to be confused with the 1998 comedy, there’s a new Sour Grapes. This documentary is touring the festivals and art house theatres and it had its world premiere at Hot Docs. It is now making its way to Vancouver for its official Western Canadian Premiere, opening August 12 at Vancity Theatre in Vancouver. The City of Victoria had a prestigious showing during Feast, Food and Film with local winemakers de Vine offering tastes of both this sparkly film and local cheeses.

This feature by Jerry Rothwell and Reuben Atlas slowly but surely examines the personality behind one of the world’s greatest wine frauds. Rudy Kurniawan was not caught until March of 2012 where he was indicted for allegedly selling fake wines at auction. Many bottles made in the Burgundy region of France were relabelled and sold as expensive wines, like Domaine de la Romanée-Conti and Clos St. Denis.

A fair bit of Kurniawan’s background is nicely explored to figure out why he decided to pull off the scam that he did. His father tossed money at him so he can enjoy his American life. His mother was dearly loved, and he was the only child more or less given the full task to take care of her. This detail was greatly appreciated, as most Asian countries treat the matriarch with the greatest of honour. However, for the other parts of his life, he could be a jerk in disguise. This individual does not look like it, although with many insightful interviews with experts in the field — ranging from well-known names like winemaker Laurent Ponsot (who felt scandalized since it was his product being resold), film director Jef Levy (revealing insights to the Los Angeles scene) and consultant Maureen Downey (who investigated this case) — what’s exposed is like fine wine itself. You have to identify the best with the worst. You also have to introduce people not familiar with what makes drinking wine such a passionate love affair to newcomers, and this film fulfils just that.

Through a series of interviews, clips and montages leading up to the auction that would eventually rock the world, plenty of insight are offered to train a neophyte to the scene. On a smaller scale, there are wine clubs where only one individual will bring the best item from his cellar and the rest second-rate bottles.

This documentary guesses that Kurniawan was just a bored satellite kid transplanted to America with nothing better to do. He enjoys his wines. This film succeeds at painting a great picture of who he is and reflecting on more than just one aspect of cultural life pressured upon him. Sadly he does not have the business savvy his father has. There are proper ways to make a decent buck and indecent ways which, if caught, can embarrass not only himself, but also disgrace his family name. I’m betting his family still has their back turned away from him, as this disgrace is not one that is easily forgiven.