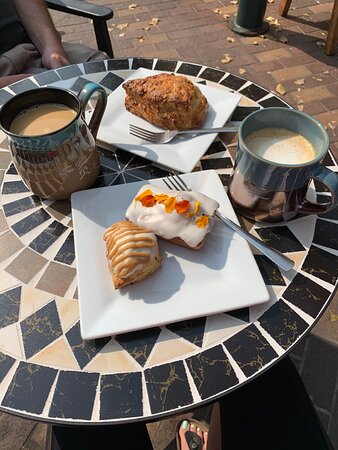 Tucked away in a side-street is a block of nothing but tres bonne eats. On one side is West Coast Waffles, and the other, many an eatery along Trounce Alley (Bodega Bar, apa Bar and Parks Kitchen).

Tres Gourmet Bakery and Cafe is a stop few will make when the scents from the alley enticing. But I wanted something quick, and the coffees by themselves are tops! They serve all the types–including Red Eye–and it’d be an article to explore how they make ‘em with heart.

Instead, this stop is comforting. There isn’t a lot of outdoor seating options (it’s limited in the tight street known as Broad, ironically enough). Indoors, the tables are presently arranged so there’s plenty of space for those social distancing. But for me, it made me feel like I was in the Roman Pantheon. That wasn’t their intent, as the design is more minimalist modern than classic, but I could also sit for a spell to read Lilo and the Samurai volume two before it was time before my appointment to get my second vaccine shot. Yes, soon Don and I can check out places a bit more frequently since masks aren’t as mandatory.

This operation opened late 2020, amid the pandemic, and I’m glad they’ve survived the trying months of staying in business. As a mostly take out operation, that’s easy to see why. hey offer a lot of baked comfort foods–cinnamon buns with cream cheese for example–but it was the packaged brunch, a bun with egg, cheddar and bacon, I had which had me ready and hearty enough to get the jab without even flinching. They don’t use fancy names to describe what’s offered. It’s a tossup between freshly made buns, croissants, scones, or a loaf (infused with the taste of a herb) and those staples which define a basic breakfast or lunch.

For approximately $12, I had a very satisfying meal and a coffee. They do offer soups and flatbed pizzas at certain times of the day, which I could’ve gone for, but I saw nothing on their regular menu during the time I visited. I’m sold since all the cookies on display had me licking my lips and knowing my waistline is going to expand because of it. They average $4, but oh my! From Ginger Molasses to Salted Peanut Butter, I’d have trouble deciding. The selection doesn’t change often, as Tres’ website lists them, so I gotta plan for when I’ll be back through their Facebook page as they advertise their daily specials.