Bubby Rose’s Bakery is an operation that needs multiple visits in order to appreciate its wide and varied menu. Unless I’m going to Langham Court Theatre for a show, I have to make the trek to the edge of town for a bite. During Victoria Fringe Festival time, it’s worth the 6-minute walk up and down the hill to grab a bite. I snagged a slice of pizza in one visit, but I feel this is not enough to judge. At another time, I had their egg salad and it’s tops! To go through the list, it’s nearly fruitless–this place is a must. I highly recommend the Bubbymosa. It’s a curry baked into a wonderfully tasty pastry!

END_OF_DOCUMENT_TOKEN_TO_BE_REPLACED

ES: The Cook & Pan is an out of the way Polish cafe. They were formerly located out by Cook Street proper but now they’re off Amelia Street. A social media post highlighting their delicious sausages was not the draw, but when I saw they’re offering a dill pickle soup, not only was my interest piqued but my mouth was already watering. No drool bucket was needed.

After a late morning film with Don at the Vic Theatre during the Victoria Film Festival, I asked if we should seek out brunch.

DK: Ed proposed and I said yes! To brunch! Put a bacon ring on my finger, Ed and rip that pierogi garter from my no-longer teasing ankle!

Speaking of love and desire: Ed’s lusting after dill pickle soup was matched by my limerent euphoria upon finding dessert pierogies in the Cook and Pan freezer (blueberry variety).

END_OF_DOCUMENT_TOKEN_TO_BE_REPLACED 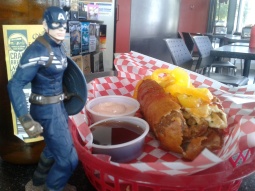 The Atomic Rocket Breakfast Bomber looks ready to take off, but upon tasting it today, just where it goes is not quite orbital. It’s available today only (while supplies last) at The Pig BBQ Joint and comes with a free early-bird pass (starting at 8am) to Cherry Bomb Toy’s Ultimate Hobby & Toy Fair that’s happening October 5th at the Pearkes Recreation Center.

I flew immediately into town to try this new idea out, and if I had a jetpack, I’d be arriving in my Rocketeer get up. However, that costume is still in the works as I need to find the right aviator jacket before I can make a helmet and flight pack. Instead, I arrived in my all-weather jacket with the Apollo 11 and Tesla patch to show I was in the mood to try this meal.

END_OF_DOCUMENT_TOKEN_TO_BE_REPLACED 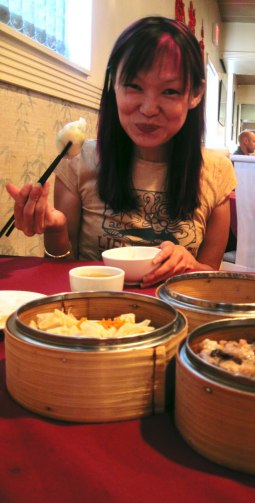 Going out for dim sum with my relatives have often made for a traditional Sunday brunch. That’s when it’s most popular. But to sate a sudden craving, it can be found served on other days of the week and sometimes not even brought out in a cart. That’ll depend on the restaurant.

When going out with friends, it was a plan concocted the night before. My friend, Qué Banh, had a craving and checked to see who was interested in an impromptu gathering. Also there was her father, Chan Hai, and her friend, Triana Avis.

When we arrived at Golden City, Qué was disappointed that the carts weren’t being wheeled around. She said it took away from the entire dim sum experience.

END_OF_DOCUMENT_TOKEN_TO_BE_REPLACED

For some tourists, dining at Pike Place Market is a must. It’s a mecca for fresh seafood, vegetables and luxuries all over the world. Almost every culinary region is represented but as far as I’m concerned, this place is still part of a wharf. I was ready to wolf down the more exotic than traditional foods I saw here.

The place is a bit of a maze too, and it really takes a weekend to explore it. Unlike the early days where it wasn’t as famous or on the working days where this place isn’t as heavily trafficked, I’d enjoy wandering around and trying a few cafes and hitting Golden Age Collectables downstairs.