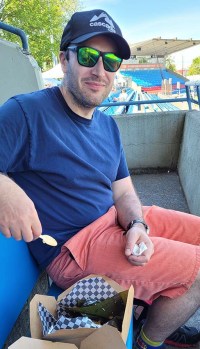 Does this make the quarterly event wildly different from any of the other market-type events hosted throughout the CRD? I certainly hoped it would!

ES: I wasn’t aware of this event until Don told me, and I suspect it started up when health restrictions were lifted to allow for such gatherings. Out by my neck of the woods, Saanich, we also have a similar type of show but do I really want to go to Uptown Mall?

Downtown is a better choice–North Park is west of the city core, and it’s a beautiful area with a handful of diners and other goodness to wander around in.

With this event at Royal Athletic Park, it took up one side more than to use the baseball diamond field. All I can say is batter up! Don and I were there to see what was offered, and there were some interesting goods that I could’ve picked up, but I wanted to fill up instead. I didn’t have breakfast.

DK: We started with tamales from Food on the Run (a vendor that also frequents the Esquimalt, James Bay and Moss Street Markets). I went for the vege option, which featured a filling created by fellow Victorians the Very Good Butchers.

Fact check me Ed, but I believe tamales from Organic Nixtamal were approximately $10 each after tip. A bit on the pricey side when compared to options in Vancouver, but my vege option was large and tasty. The masa dough had a pleasant texture and its subtle sweetness played well against the mild-medium spiciness of the filling.

ES: Yes, they definitely weren’t cheap, but when considering they were made from home with love, why be fickle? From another operation, I had a very differently shaped rice ball that barely filled me up. Yes, I was hungry, but at least the garlic flavour was just right. It was a touch dry though. And on a hot day, we didn’t stop there….

DK: To cool off I grabbed a chicha morada (a Peruvian drink made by boiling purple corn, pineapple, cinnamon, clove and sugar) from Dulzura Latin Homemade Bakery. The boiled sugar gave the beverage a slightly syrupy consistency, but it was not cloyingly sweet by any measure.

Mercifully Dulzura does not try to market Purple Corn as some miracle health food. Others, however, do. Health benefits of drinking fruit juice boiled with sugar aside, this drink offered exactly the kind of new flavour I was hoping to be exposed to at this event. Chicha morada is a big enough staple in Peru that you can easily find drink mix packets on Amazon, but I’m not sure where else you would find it sold in Victoria. Not sure if Howl Brewing out in North Saanich still makes their chicha morada ale.

ES: Maybe it’s time Don and I have an adventure away from the city to find other hole in the wall operations, and other good eats. All I can say is stay tuned. The summer isn’t over yet!