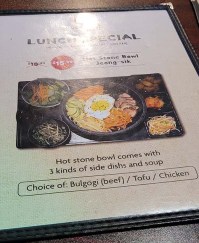 There’s just one thing missing… What could it be? Ah, yes! The desire to talk about anything other than Chicken Gizzard. That’s what’s missing. Ed! Help! I’m trapped in a gizzard gully! 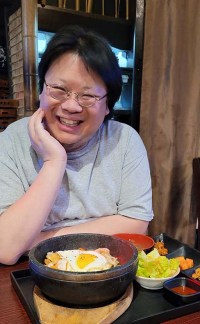 ES: I had chicken gizzard before and yes, I’m just as crazy over their crunchy crispy goodness too. Every restaurant generally crisps them up similarly and what makes them stand out is in how long they were marinated prior to putting them in the deep fryer. They’re the highlight of our meal at Park’s, and they have a terrific bite to them because of the flame baked chilli skin that makes up this dish.

Sorry Don, but I don’t think we can stop raving about this dish.

DK: The gizzard, to my uninitiated palate, had the texture of calamari and the flavour of Taiwanese popcorn chicken. Fried chicken has been having a moment. We’re at the tail end of a Nashville hot chicken trend that followed an extended Korean fried chicken boom. Not to mention the explosion of fast food chains expanding into the CRD as we write. Make sure you give gizzard a try before you’re completely sick of non-stop poulet propaganda.

ES: And as for what else this establishment offered, well we simply did the lunch specials. I can honestly say I was stuffed! 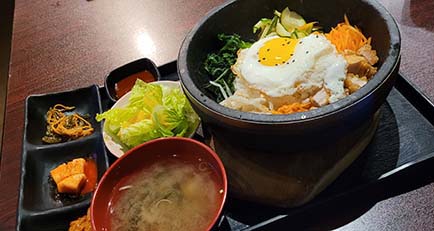 The Hanjeongsik served here is the lunch sized variant of the dinner version. With a partially cooked egg, rice, carrot, and cucumber slices, it was a meal for princes (not king, as sometimes described) who are fighting for the throne. The only thing truly tasty about this dish is the crispy pork.

DK: I found the lunch special nothing to write home about, but if I did I might compose something like this:

How are things back home? Did you enjoy Aunt Sue’s visit? I know she can be a bit much (I don’t know why you always let her take your bedroom, especially when she insists on sleeping with her cat. DOES SHE EVER BRUSH IT?). Things here are good. Ed and I went for lunch at a place called Park’s the other day. We both had Hanjeongsiik. I had mine with beef bulgogi. It was fine, but I think that place we went to last time you visited was better. Anyway, that’s all from me for now.