For me, Portland turned into New Orleans for a few hours as Yvonne and I ventured into new territory. With only a road map and instinct to guide us, we were only interested in dodging wet weather. So we headed towards the Columbia river instead, and I partook in other pleasures other than my own growing gullet.

But even for a pit stop for breakfest, I’m sad to say Jack in the Box stopped making their delicious chiabatta burgers. Although discontinued last year, some outlets continued on until about a month ago.

Out of all the burger chains, Jack’s burgers have always tasted better. They’re still holding the crown with a new sourdough bun burger. They’ve been more innovative with what to use for buns than any other national chain and I must say Burger King is looking less appealing these days. I’ve stopped hitting McDonald’s a long time ago because their quality never appealed to me. They just make burgers too small for this growing boy to appreciate.

But what I needed was seafood! I don’t make any bones about it. So far this trip has become more than just a culinary adventure; it’s a bibliophile’s wet dream come true. While in Portland, I had to stop by Powell’s Books and blew my budget. Like I didn’t realize that’d happen. At least I still had my credit card for two of Portland’s famous eateries:

Now I must admit I never had crawfish before and I’ve been dying to for the longest time. I finally got my chance with Jake’s Crawfish Boil ($18.70). Now I must say, this meal can easily take a long time to eat if one wants to appreciate all the bits of meat found in the tiny crustacean.

It takes effort to get at the meat in the claws too. But most people are after some tail. That’s where the flavour is, and they’re definitely a tasty soft treat. These tiny critters are nothing like lobster at all. And with it all boiled in a huge pot with some nice spicy hot sausage, corn and thyme, the flavours were evenly soaked through. I never had corn this good until now.

It made the meal I had at the Crab Pot’s tame in comparison. Too much starch can kill a good broth and I’m glad there weren’t any potatoes added to this mix. There was a light spicy flavour that I could taste throughout.

But what I enjoyed the most was the cucumber vinaigrette that’s served with my oysters in the half shell. I got a combination which included oysters from around the region.

They were from Netarts Bay and Hood Canal. And each of them had a different texture when going down. One just deliciously dissolved in my mouth, another’s natural taste got overshadowed by the cucumber dressing I put on top but the combination of sweet and cucumber worked very well.

But the last two were tiny, lacking in meat and chewiness, but tasting like it had a fair bit of mineral left in them. But that flavour disappeared and left a more tasty smack to my lips.

I really needed a guide pointing out which oyster came from what shore than to guess. If that was mentioned to me, I’d say this place is close to perfection. 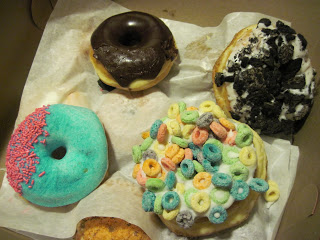 Afterwards, another place we headed to was the Voodoo Doughnut Shop that’s located near the Historic District. They’re not bad, but I think I got a box of a dirty dozen that was sitting a bit too long. It’s either that or the people here need to pay attention to how long their prepackaged products should sit on the shelf.

Even late at night, at around 9, there was a lineup for Voodoo Doughnuts. After day one, I find that these doughnuts are more about style over substance. I don’t think I’ll ever enjoy cake based doughnuts but for other types, I’ll go after them like a Hellhound chasing after Robert Johnson.

But for the ideas of flavours and what they do design-wise, this is a place where plenty of dirty jokes can easily be spilled.

The cock-n-balls is a phallic shaped doughnut, which is appropriately filled with cream. It’s basically a Boston cream pie. But there’s another which I’ll dangerously sample, a bacon and maple cream piece of goodness which I consider the ultimate death by sugar experience.

It doesn’t look that bad, but I’ll try it … in the morning.

From what I did try that night, the quality of the toppings are great. The chocolate and coconut doughnut was good, but the doughnut itself tasted like it was coming close to be a few hours old. They’re no Krispy Kreme, but it can be considered to be like a Tim Horton’s classic original.

When compared to Japan’s crazy designer craze with their innovative food creations at Mister Donut, Voodoo certainly has a lot of attention. So far, I wouldn’t say they’re anything too spectacular.

Maybe for breakfast, I’ll have the fruit loops doughnut too, and start that hike as we plan to go to Mt. St. Helens. The only thing erupting will be my stomach if I don’t start doing those hikes soon.

So what’s the Bloke verdict? TBD after I try to beat Homer Simpson’s record for eating doughnuts.