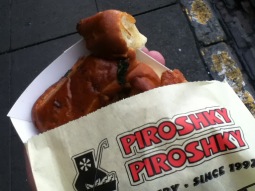 Pike Place Market has more than enough diners and international food operations to make finding a brunch easy. With me starting at the north end of the market and working my way down to the main entrance, with only $25 in my coat pocket, just where should I go?

The Piroshky Piroshky Bakery is a must; their food is always great to nibble on the go until I find my next stop. At less than $5 for any of their products, to pick what I wanted was tough. I settled for the Ham Cheese and Spinach. It was delicious and consistently flavourful. I have yet to eat a bad piroshky ever since I’ve been coming here.

And I could get “Mee Sum” more goodies at the other bakery further down this avenue for $6 or less. In an operation that borrows from my namesake (well, I can dream) knows how to get at the heart of what I like.

I should have picked up three crab Rangoons than two, since I was popping them down like little wontons. They were satisfyingly good; they were still glowing warm. I recommend buying as much variety here than just a sampler.

With $10 left, it was time to wander around the grocer’s section, namely Sosio’s Fruit and Produce. After glancing around, I found some nifty rolled fruit twisty doodles. At 5 for $2, I bought more than enough for the Emerald City Comicon I was going to later, and save a few for the trip home. They’re sumptuous; the berry flavour with coconut powder dusting made for a nice combination.

There were other flavours offered too, but I have a weakness for cherries. I was surprised the brown bag ended up being a little greasy, but that sacrifice in what the company uses as preservatives was all in good.

On a different trip, I’m stocking up on the variety of wild mushrooms they sell. Yes, this place sells truffles! They’re grown here in the Pacific Northwest and I had to pick up a tiny piece to sample when I was back in my hotel. Mind you, they go better in pasta, but I can finally say I got to taste a truffle in its purist form. The flavour is overrated. After being cooked and processed in a meal, the true elegance really shines, like in the bottle of black truffle cream that I picked up at La Buona Tavola.

But what am I going to do with the remaining bits of my money? City Fish Company offers oyster shooters. They go for three shots at $6 (or $2.50 each) and I consumed enough to sate me till dinnertime.

At Pike Place, dining does not have to be about sitting down. Just wandering around and deciding what nifty treats are available can certainly make a meal too. Depending on what one finds, it can all be done within a set budget!