Victoria, BC‘s Capital City Comic Con (Sept 23-25, 2022) is almost here, and after a two-year absence because of a pesky pandemic, everyone (at least local) is excited about it. This city had a handful of other shows throughout the years which did not last long. And the hope from the team of businesses involved with this show is that this fixture is a tourist attraction in the years to come. And hopefully, #Nerdtoria can become a hashtag to use to recognise fandom in this garden city.

For a complete round-up on what to expect, please check out our sister-site’s look at this upcoming show. This September event is exclusive to 2022, and CapCity (not Comic Con as it’s registered to the San Deigo event) is expected to resume in March 2023 as part of the Spring Break tradition.

Getting a bite in between panels or wandering around won’t be easy. The events from the past usually required patrons to the Victoria Conference Centre to buy from their in-house catering service, and outside food was not allowed. Things may change since the pandemic is not over and instead of packing people in, to keep everyone distanced is for the better. Until more news is announced, we offer this updated guide (last one was dated 2018 and a lot has changed since) to eateries nearby that’s worth the visit.

For in-event concession, the organisers reported that it’ll be in the Crystal Gardens venue. 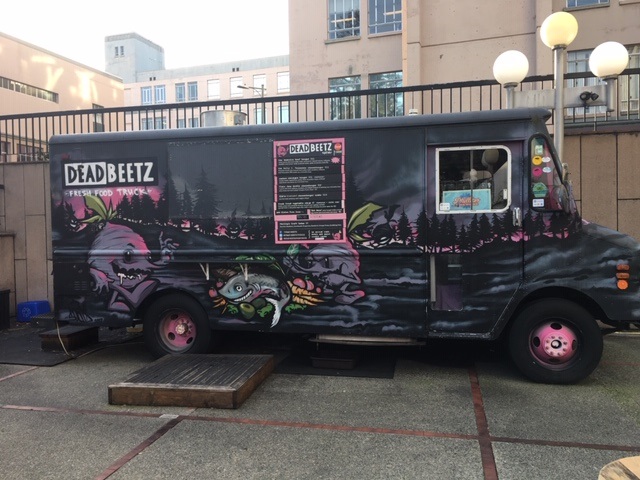 Behind the Royal BC Museum is an outdoor food court, and two mainstays include Deadbeetz for delicious burgers and The Rolling Beef for Caribbean style fast food fixins. If you wander around, you’ll find other operations, which include The Yummy Truck and Canada Cone (for ice cream).

Similarly, along the causeway of the Inner Harbour are at least two food cart operations. Hotdog Hustlin’ (review) serves up more than hot dogs, but also Filipino style BBQ, but with the changing of the seasons and cooler weather ahead, it’s hard to say if they and Rebar Food Truck will be in operation during the time of the convention. On the opposite block is Jucee Health Bar for the waist-line conscious.

Thankfully, Government Street is lined with many more eateries. The corner of this and Humboldt Street is home to many operations. Some have changed over time, and others mainstays. Tractor (review) replaced Sam’s Deli and Bistro, and Frankies (review) was once the Cheesecake Café many decades ago. Further up the street and away from the centre include Red Fish Blue Fish and Nautical Nellies.

While Milestones and Old Spaghetti Factory are mainstays to the area, they aren’t highly recommended. Reviews are mixed, and when they can’t get an order right (the steaks were delivered to tables as well done than rare, or the noodles aren’t fully cooked) we at Two Hungry Blokes don’t think of them as tops.

Instead, the following still rank high in where to dine. We’ve been there in the past, and revisit from time to time. They are locally owned operations than franchise:

Uchida is a simple decision if you are desiring some excellent Japanese fusion cuisine, and you don’t want to spend a lot of money. It’s a place that’s stood the test of time since we visited in 2013. Though their hours of operation are limited, they have the benefit of gluten-free options on their menu to make up for it. There are also daily specials, and they are located less than two short blocks from the Victoria Conference Centre.

Sadly, the space once occupied by La Fiesta Café is gone. They offered tasty tater tots, tacos, and burritos. In its place is Smile Chicken, a franchise operation offering Korean fried goodness. They even have corn dogs to go with chicken! A more detailed review will come, and for those convention goers heading home late or are still around, this is one place open late to get a bite.

The meals are fresh and delectable when the cooks are not rushed to churn out an appetising product. It’s a staple of the downtown lunch crowd, and certainly busier at specific times of the day than all. You can check out our (old) review here. Thankfully, since then, this operation has improved.

DISCLAIMER: The Victoria Conference Centre staff discourages attendees to bring food from other venues into its court. Please finish any snacks or meals beforehand. Water bottles are safe, but any visible food items will be subject to security’s discretion.