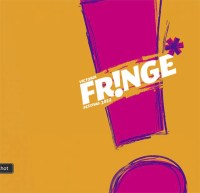 The 2022 Victoria Fringe Festival is a wrap, and it’s almost a full return to form. This event ran from August 24 to Sept 4 and was well attended. I passed by many lineups while wandering Downtown Victoria at those venues that hosted, and the one big thing that changed, as a result of the pandemic, was the lack of seeing talents run from venue to venue to pass along flyers of their shows, and saying you must check it out. While there were fewer places hosting, that’s to be expected (assuming if they adhered to indoor health code regulations).

An internal change that not every patron is aware of is to buy tickets in advance (online or at the box office). I observed a few people were unaware, and instead of being turned away, were allowed to purchase at the door. I’m glad Intrepid Theatre was aware this situation may happen, and were prepared. I suspect further revisions will be in store to help streamline future events. And as the world transitions to accepting Covid-19 won’t go away, further tweaks will be made. All anyone can do is to be mindful in how things must now operate to keep everyone healthy and safe.

END_OF_DOCUMENT_TOKEN_TO_BE_REPLACED 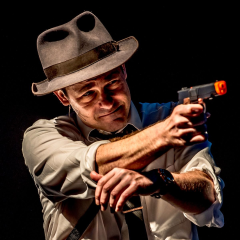 In what keeps me coming back for Crazy For Dick Tricks is in how Tim Motley is a consummate entertainer. He knows his playing cards and every new deck he has to burn through inside and out, can rap with the best (I wonder how he’d do in a battle slam moment though) and can bring in the crowds at many a performance venue. He’s wrapping up his round of shows at the Victoria Fringe Theatre Festival and will soon visit Vancouver Fringe starting Sept 6th.

Double entendres aside, which makes up part of the appeal of his shows, his style of stand-up comedy is right up my alley!

On stage, he is Dirk Darrow, a hard-boiled 1930s detective. He’s the P.I. who can woo any femme fetale in this latest case (complete with a few James Bond style voice over moments), He’s the Dick in that true old-fashioned sense where he’s right at home with Sam Spade. I first saw these shows under the assumption he’s a paranormal investigator than private, but when I saw his magic prowess, I was hooked. Some iterations include him applying mentalism too, so the occult is never too far.

END_OF_DOCUMENT_TOKEN_TO_BE_REPLACED

Officially, Intrepid Theatre’s Fringe Festival has a deal with The Joint Pizzeria, Chocolats Favoris, Bao and 2% Jazz Coffee so active theatre goers can fuel up in between shows. By showing your button, a 10% discount is applied.

This list is updated to reflect upon a few new operations that have opened since, and is organized by proximity to the performance venues.